‘If you have a business idea, it’s easy to get started in Vietnam’ 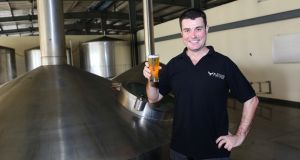 Michael Comerton grew up in Belfast as the Troubles began. Looking back, he says he can see how little opportunity there was for business.

“Having left now, looking back, when you see the opportunity people have in other places, then you realise how lacking it was.”

Comerton left Belfast to study law in Trinity College, Dublin, in 1989. “My uncle had studied at Trinity and had good stories about it. He had to get special dispensation from the bishop to do it.”

Comerton spent his college summers working in Hong Kong, the United States, Japan and Toronto. He went back to Japan for a year after finishing his degree.

“The change in the law there at the time to allow craft brewing gave me the idea to go into that. I’d thought about wine-making, but I didn’t own land and contract wine-making hadn’t developed at that stage. Craft brewing was less capital intensive,” he said.

In 1994, Comerton started his first year of a course with Heriot-Watt Brewing and Distilling in Edinburgh. “We were brewing students, so there was a lot of pub visiting in the name of education.”

He then got a job working as a brewer for Tooheys in Sydney.

Michael stayed with Lion-Nathan, the company that owns Tooheys, for seven years, gradually transitioning to craft beer within the company with craft beer James Squire – named after an early convict transported to the country from England, who is now credited as its first brewer.

Comerton lived in Kirribilli, a suburb of Sydney, a place that was full of Irish. “Fosters approached me to run their craft beer business, Matilda Bay Brewing Company.

During that time, I also set up a little sandwich shop in Manly Beach with a partner.

His plan was to start his own business. Craft beer was beginning to feature in Australia, but no one was making money from it, according to Comerton.

“I decided to look to Asia and see what I could set up. I dropped in to Vietnam to visit a buddy and decided this was the place. The demographic suited. It has a young population, with 70 per cent of people under 40 and a million people turning 18 every year.”

It was a difficult time to get capital to start a brewing company during the global financial crisis. Comerton changed the business model to content production, getting someone else to produce the beer.

By 2014, the time was right to launch Platinum Beverages’ first craft beer in Saigon.

“The idea was that we’d make a beer that didn’t scare people in the beginning. We made a beer that had the same colour and bitterness as Heineken. Our first beer was filtered, and gradually we released an unfiltered version as people got used to it. A few other craft beers have launched since, so there’s a bit of a craft community now.”

Platinum now has three permanent beers – a pale ale, a golden ale and a session IPA. They also produce one-off specialties. “We’re in the process of building a restaurant, which will hopefully open by September. After that, the plan is to have further restaurants. We’ll then be able to launch all the weird and wonderful beers we like, because we’ll have a guaranteed volume.”

There are 35 staff working for Platinum, including Michael’s brother Mark. Saigon is a great place to live, says Comerton, but the locals see business very differently.

“In the West, you meet somebody, make an agreement and make a sale, but in Vietnam it doesn’t work that way. They’re needy in terms of attention, and it’s all about personal relationship rather than contract.”

Vietnam is the place to be for someone who has the idea to get them started, says Comerton. “Vietnam is the second fastest growing market after China. People here don’t really have a forward-thinking outlook, so if you have a business idea, it’s easy to get started here.

“There are things you can do that you can’t do in other places. In our sandwich shop in Australia, we were required to have four different sinks for washing vegetables and hands separately. In Vietnam, you don’t have silly restrictions like that, so you can launch and see what happens.”