Think that working from home is here to stay? Think again 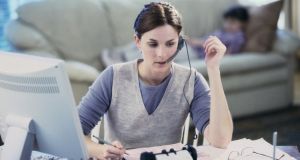 Economist Nicholas Bloom says that even when tech works, ‘people at home know they will miss out on crucial post-meeting huddles that only those in the office can have’.

Once the Covid crisis eases, the working week will be pleasantly transformed for millions of employees into an agreeable mix of a few days in the office and a few at home.

Or so I thought until last week, when I spoke to Nicholas Bloom, an award-winning British economist at Stanford University whose eye-grabbing research on working from home began years before the pandemic.

His latest co-authored study, based on months of surveys of 22,500 Americans up until December, suggests homeworking is indeed here to stay.

Workers and companies alike have found it is better than expected. Both have sunk money into the equipment needed for it ($600 for the average worker). The “shirking from home” stigma has faded. No one wants to go back to grim five-day office commutes.

All up, workers think being able to work from home two or three days a week is as valuable as a pay rise of about 8 per cent.

But there is a hitch, or rather several hitches, according to Bloom, who talks regularly with managers trying to figure out how to make the new working world work.

One thing is already clear, he says: “Mixed mode is a complete horror.” By this he means a mixed team of, say, five people at home and four in the office, all struggling to hear each other on badly-connected Zoom calls.

Even when the tech works, people at home know they will miss out on crucial post-meeting huddles that only those in the office can have.

“It’s a disaster,” says Bloom. “So firms are really trying to organise it so that you’re either all at home, or all in at work.”

But there is another thing that he says managers are even more worried about: a looming “discrimination crisis” if workers are allowed to work at home as often as they please.

Bloom’s research suggests there is reason to be concerned. A study he did on a big Chinese travel company that tested working from home nearly a decade ago showed people at home were promoted at about half the rate of those in the office.

Two common reasons researchers heard were that people at home were forgotten, while the office workers developed more “managerial capital” by having lunch, coffee or general chit-chat with each other and their bosses.

Bloom says his more recent research bolsters his belief that if workers are allowed to choose how many days they work from home, some groups, such as women with young children, will almost certainly end up doing more work at home than others.

Three years later, their promotion rates will be “dramatically lower” than, say, young, single ambitious men who come in five days a week, and a plethora of lawsuits will ensue.

This is why he is strongly advising companies not to let staff choose willy nilly how many days they spend at home.

“I think firms need to be paternalistic on this,” he says.

They should try to find ways to make sure everyone comes in the same days and works from home the same days. “Otherwise you’re going to have this ticking time bomb.”

That could be tricky: his new data shows more than 30 per cent of workers either never want to work at home, or only want to do it rarely, or for just one day a week.

Still, at least these workers have a choice. A lot of people have jobs requiring them to move things or drive to places, despite the greater risk of infection, while their office colleagues stay at home.

“They are really pissed off,” says Bloom, and their managers don’t know what to do. One answer seems obvious: pay them more. Some companies might do this, but market forces suggest many others will not. Lower-skilled jobs have been among those hit hardest in the pandemic. The bargaining power of those who hold them is weak.

In other words, the workers most likely to lose their jobs are the same as those unable to enjoy the perks of working from home.

For those of us who end up at a company with stricter than expected rules on when we can and cannot work outside the office, that might be worth bearing in mind. – Copyright The Financial Times Limited 2021