The Irish man making his mark on California’s cannabis industry 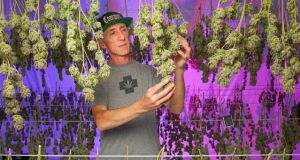 When Martin O’Brien moved to San Francisco in 1990, it was on the cusp of a technological and cultural revolution. The internet was yet to go live, and the information age as we know it was still about to infiltrate every aspect of daily life.

“There were a lot of things going on. It was a countercultural haven. All kinds of people were seeking refuge there, including many Irish, who took an extra leap from the east coast,” he says.

It was also the epicentre of the American rave scene and O’Brien became a promoter, festival organiser and event manager.

“San Francisco became a mecca of the rave music scene in America. Everything was so new. The energy was mental,” he says. O’Brien organised large-scale events in warehouses and disused land across the city, which attracted people from across the social spectrum.

But as the internet became more visible and grew in omnipotence, he started a clothing line called Communion, which was the first to ever sell online. “We were ahead of our time. We used materials that were sustainable and eco-friendly. People weren’t as environmentally aware so it was groundbreaking.”

Towards the late 1990s, things began to change on the party scene as the dot.com boom got into full swing.

“Real estate prices started exploding and office buildings went up everywhere. The party scene became more sanitised. Rather than go on all night long, they would stop at 2am. Silicon Valley was taking over the city and bringing monied techies with it,” O’Brien says.

In 2001, rather than continue running underground raves, O’Brien founded a medical cannabis dispensary called Patient’s Care Collective in Berkeley, California. “I took a risk when the cannabis industry was just in its infancy. I wanted to provide safe access, where patients could purchase high-quality medicine in a dignified manner.

“It is the longest-running medical cannabis dispensary in the world and patients can choose from a wide selection of quality controlled and laboratory tested medicine including flowers, hash, edible preparations, tinctures, topical preparations, and a wide range of cannabis concentrates – oils, wax and more for conditions ranging from cancer, arthritis, epilepsy, eczema, acne and many more.”

O’Brien left the dispensary in 2006 to pursue a passion for documentary filmmaking, making documentaries on the dance music scene, social justice issues, biofuels and big oil, and partnering with artists such as Daryl Hannah and Stuart Townsend.

But his passion for cannabis brought him back to Patients Care Collective in spring of 2015.

In 2015, O’Brien also started his own growing farm – Foxworthy Farms, 100km north of San Francisco in Sonoma County next to the renowned Napa Valley wine region. “We have a California State cultivation permit which allows us to grow 10,000sq ft of greenhouses, 5,000sq ft of indoor, and 30,000sq ft all season outdoors. Currently we have around 2,500 plants.”

He says, the “strong team” of experienced growers he works with follow organic farming practices.

“We grow medical cannabis to the highest quality, that is pesticide free, with strains of cannabis that bring the most medical relief to patients. We cure our medicine for three months to ripen the terpenes to perfection, and then preserve it in a giant “humidor” in the woods on our 82-acre property until it is ready to be packaged and sent to the consumer.”

O’Brien says this is a very exciting time for the California cannabis industry. “We’ve come a long way since 1996 when medical marijuana distribution became legal through the collective model. Now cannabis is legal to all adults 21 and over in California.”

According to DBS Analytical, a cannabis industry research firm, estimated sales of cannabis in the United States will reach €3.5 billion by end of 2018. This is expected to grow to almost €5 billion in 2019.

“California is the sixth largest economy with an estimated population of 40 million. The growth opportunity is tremendous.”

O’Brien advises anyone thinking of moving to the US to consider getting into the cannabis business as it is one of the fastest growing industries there. “The US is still very welcoming to Irish people, so work hard, be fearless and the American dream is achievable.”

That said, the ripple effect of a successful economy, especially in this region, means property prices and cost of living are high. “People are moving to Portland, Oregon and commuting to San Francisco, which is 10 hours away, where they sleep on someone’s couch during the week just to avoid high rents, thereby gentrifying the city and hiking up prices there too. It’s insane.”

O’Brien thinks the Irish Government needs to “get with the times” and grant licences for Irish people to get safe access to medical cannabis. “It could also do a lot for young Irish farmers who seem to be struggling.

“That said, I have no intention of coming home. I’m part of the furniture here. This place is still great, even though it has lost a lot of its soul since Silicon Valley exploded,” he says.