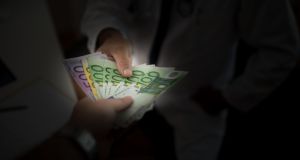 The Mazars survey found that awareness of anti-bribery and corruption legislation enacted in 2018 is “worryingly low”. Photograph: iStock

Occupational fraud and abuse is causing financial losses in half of all businesses, a survey from professional services firm Mazars suggests.

Awareness of anti-bribery and corruption legislation enacted in 2018 is “worryingly low”, the survey found, with about half of companies unaware of the introduction of a corporate liability offence.

Where losses were concerned, companies suggested the average loss exceeded €10,000, while 12 per cent of respondents suffered losses greater than €500,000 over the past two years.

The principal cause of losses related to theft of cash and goods, although cybercrime was seen as an increasing threat.

“While the research indicates that theft of cash was most common at 32 per cent, a broad array of abuses were noted, indicating that businesses across all sectors are at risk,” said Justin Moran, director of forensic and investigation services at Mazars.

“Regardless of the amount or perceived severity, fraud fundamentally threatens the viability of a business, impacting not only owners but also employees and customers alike.”

A third of the 100 companies surveyed were privately owned, while almost a quarter were listed entities. Some 56 per cent of companies included in the survey had more than 250 employees, while 40 per cent had fewer than 100 staff.

Mazars recommended that organisations put in place anti-fraud controls to prevent and detect occupational fraud and abuse. In the absence of such measures, “businesses may be missing red flag indicators”, the report said.

Mazars survey was undertaken online amongst 100 “senior figures” in business.