Ireland only EU country with no policy towards grid-level solar 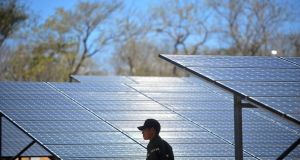 Every EU country has grid-level solar already in place, as does Northern Ireland. Amarenco’s chairman says it has been waiting three years to progress 16 projects in the Republic. Photograph: Hector Retamal/AFP/Getty Images

Solar energy company boss John Mullins says there has been a staggering lack of progress in enabling the delivery of new renewable energy projects in Ireland.

A Renewable Energy Support Scheme (RESS), announced in 2017 by then minister Denis Naughten, is still awaiting EU confirmation that it does not breach state support rules. It is not now expected to be activated until 2020.

Mullins, executive chairman of Amarenco, says the delays mean Ireland has no chance of meeting its national target for renewable energy production, forcing it to pay a hefty price for “fines”, or statistical transfers from other EU states that are producing ahead of their renewables targets.

In short, we should not be adding substantial cost to the national balance sheet “when we have our own solution”, he says.

He concedes Ireland will need support for the technology in the short term, though subsidy-free solar is beginning to get a foothold in Spain and France. France is producing solar energy at 5.5 cent per unit of electricity. If Ireland invests at 9 cent per unit through RESS, “by 2025/2026 we will be in the money”.

The total cost of missing renewable commitments and binding reduction targets on agriculture, transport and heat emissions could be as high as €455 million a year, according to an analysis by Paul Deane of UCC Centre for Marine and Renewable Energy.

RESS will introduce a new auction system where types of energy will bid for State support. The scheme be funded through the Public Service Obligation Levy.

Mullins, a former chief executive of Bord Gáis, says there is a narrow timeframe to act but warns of the consequences of missing the building cycle: as it stands, a large number of shovel-ready projects will not be built until mid-2021 at the earliest.

Ireland needs to have infrastructure in place for any chance to meet demanding 2030 targets. It took from 1992 to now to get 33 per cent renewable electricity in Ireland; that target is about to become 70 per cent that has to be achieved within a decade.

Amarenco, Mullins says, has been waiting three years to progress 16 projects in the Republic. In every other EU country grid-level solar is already in place. That includes Northern Ireland, though there are 200 more hours of sunshine a year in the south.

It has some 200MW of Irish projects in development, mainly in the south in an area stretching from Wexford to Clare. Each facility will be made up of 22,000 photo-voltaic panels on ground-mounted frames. More than 60MW has planning permission and is shovel ready; the only outstanding factor is how quick the ESB can provide connection.

They can be built within three months, “allowing us to keep taxpayers’ money at home, in place of paying hefty fines for carbon emissions from 2020 onwards”.

Mullins says only that Amarenco has successful solar operations in the Middle East and France, “we would have closed down our operations in Ireland a long time ago”.

As of now, he says, Ireland continues to stand out as the only country in the EU that does not have a policy towards grid-level solar, on what is the fastest growing source of electricity in the world.