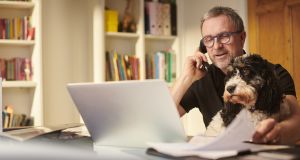 Almost a third of employees say they like being able to work with their pets close by. Photograph: iStock

Companies are facing the prospect of an increasingly flexible workforce in the future as the shift to remote working is likely to become more permanent, a study from Microsoft has found.

The Future of Work report, which questioned business leaders and employees across the spectrum of Irish businesses, discovered companies believe 45 per cent of employees will continue to work remotely, while employees expect to spend up to a third of their time outside the office.

“Almost every business leader cited the importance of changing their organisation’s way of working to become innovative and flexible,” said Aisling Curtis, commercial director with Microsoft Ireland. “That’s the theme that goes through the whole way. If you think about it, we are in a 200-year model of a nine-to-five, commuting either side of it, that now has been turned upside down with the onset of Covid.”

Some 72 per cent of organisations have implemented remote working policies, compared with 22 per cent last year, prompted by the Covid-19 pandemic that sparked a sudden shift to remote working. “You need to set the boundaries and the expectations of what is okay, what’s acceptable behaviours from a remote working point of view, the emphasis on impact rather than presence,” said Ms Curtis.

The research found 71 per cent of employees worked remotely during the first lockdown. However, the temporary situation may become a more permanent arrangement for some staff as employers begin to recognise the benefits of remote working.

Some 73 per cent of business leaders saw equal or more productivity from remote workers rather than a decline, a common fear cited in opposition to remote working in the past, while 68 per cent of Irish leaders said they believed remote working would be an important factor in retaining talented employees. That was higher than the European average of 56 per cent. Another benefit for businesses was in helping them to meet their sustainability goals.

“Some 74 per cent of people expect remote working policies to improve their employee value proposition, which is absolutely key for a sustainable workforce going forward,” said Ms Curtis. “So when leaders and employees are saying that productivity is still there, the impact is still there, it’s a key lever from a retention point of view and attracting talent; in that instance I really believe the stats that are coming through are what we are going to be seeing.”

Companies wanting to get the most out of their staff need to start early though. Irish staff said their most productive hours were 9-11am, with the ability to focus declining rapidly in the afternoon.

Among the top benefits of remote working for employees were the ability to dress casually, which was cited by 79 per cent of workers, while 56 per cent said they had more time for hobbies and 46 per cent welcomed a more personalised workspace. Almost a third liked being able to work with their pets close by.

There were significant challenges for business leaders though, as many were responsible for leading remote teams for the first time. The survey found 58 per cent said they had not yet effectively learned how to delegate and empower virtual teams, while 56 per cent struggled to create a strong and unified team, and 51 per cent felt they had not effectively learned how to be empathetic with their teams.

Businesses are still chasing an innovative culture, one where employees feel empowered and there is open communications with managers. The benefits of remote working were more keenly felt in these companies, with 72 per cent equally or more productive when working remotely, versus 60 per cent in less innovative companies. Almost 60 per cent said employees felt empowered to make decisions, while 93 per cent said they could seamlessly collaborate with colleagues. Most importantly, 69 per cent feel happy at work, compared with 39 per cent of employees with less innovative company cultures.

However, it may present a challenge to companies working to maintain that in a more remote working environment.

“Although we haven’t seen a decline in innovation or innovative culture, the European statistics actually show a decline. That’s something that leaders and organisations need to be aware of, that they are ensuring that there is that innovative culture established, and maintaining it,” Ms Curtis said.

The research was conducted by Boston Consulting and KRC across Europe among 9,000 respondents, with 500 employees and 108 business leaders in large-scale organisations across a variety of sectors in Ireland included.