Why it’s worth taking time to tackle lateness

Poor timekeeping is bad office etiquette and it undermines performance 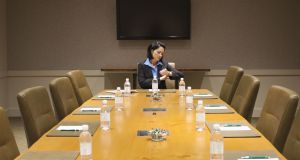 Something as simple as closing the door when the meeting starts can send out a signal that being late isn’t acceptable.

Lateness also has implications for performance because it saps time. Things don’t happen when they should and meetings have to stop to summarise the proceedings for latecomers.

Everyone gets held up at times and allowances are made. However, habitual late offenders are a menace because they screw up everyone else’s schedule and stop the orderly flow of process. Unless there’s a really good excuse, repeat offending sends out the message that “my time is more valuable than yours”.

Another major source of frustration is that not only are people late but they’re inconsiderate about it. This usually manifests itself as sending a “delayed” message when everyone else is already on their way or assembled.

As a result, lateness changes the tone of interactions because those who have stuck to the schedule get tetchy especially if they’re under pressure themselves. This means meetings may start from a position of simmering resentment, which makes for less successful outcomes and issues remaining unresolved because time runs out.

Digging into the psychology of lateness throws up some interesting possibilities about the personalities of those who can’t get places on time. It can indicate poor self-control, procrastination or the failure to set realistic goals. It can also be a sign of lack of focus or deeper-seated problems such as stress and anxiety.

Habitual lateness may be part of that very hard to deal with phenomenon of passive aggression where someone is resistant, often in a way that is hard to put your finger on, that undermines progress and makes people feel uncomfortable because the aggression is there but unspoken.

Lateness can be a cover for those who crave attention because it gives them the opportunity to make an entrance and be important if their arrival stops proceedings. It can also be a sign of pushback, so if someone is persistently late then there may be something more significant going on.

In this case, if you’re the team leader it may be worth trying to find out if the lateness is masking a deeper business or personal issue. An example could be where someone feels habitually bullied or ganged up on in meetings.

Rebels like to be late because it marks them out as different, while one of the most irritating types of “latees” to deal with is those who never admit to being so. People who are always rushing and always late may in fact be using it as a cover for boredom or because they don’t like the sound and action vacuum of being alone with their thoughts.

It’s up to managers and team leaders to set the timekeeping rules. If you’re always on time then people quickly realise that’s the expectation and it’s no harm to flag that repeat offending will be included in performance feedback. It may also be useful to look at late patterns.

Are people late because of the timing of the meeting or because they have to travel in unpredictable rush hour traffic? Would a video-conferencing call do the job instead? There is no shortage of digital assistance to send us alerts and streamline our calendars so at its simplest could it be that people would still benefit from some old-fashioned lessons in time management?

It’s never any harm to periodically go over why things should start and end on time and to emphasise that being late is equally disruptive for pre-arranged phone calls and teleconferences as it is for face-to-face meetings. Often people don’t mean to offend.

They just get lazy, or they may fall into the category of naturally absentminded, and need reminding that being late is unhelpful. Something as simple as closing the door when the meeting starts can send out a signal that being late isn’t acceptable, as can a reminder noting the time of the meeting with the word “sharp” written after it.

A little bribery may also be successful in getting people there on time. Urban myths abound on this subject but it seems that people are surprising pushovers for chocolate biscuits or company-supplied sandwiches at meetings.

Good timekeeping is not magic, it’s a habit.

Being on time shows respect for people and process. Being late does the opposite.

Be realistic about how long things take. A commute with no traffic may double at rush hour.

Prep in advance, don’t start five minutes before you’re due to leave.

Flag your lateness as soon as you can to keep disruption to others to a minimum.

Set an alert for 15 minutes before you’re due to leave and do so when it goes off. It’s not borrowed time to finish something.

Identify your lateness if you want to fix it. What’s the main cause and is it for everything or just some things?