Republic’s popularity among European jobseekers up 33% 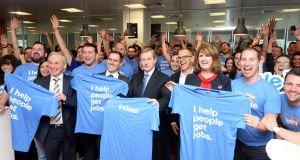 The Republic’s popularity among European jobseekers has surged by more than 33 per cent, while interest in working in the UK has waned since the Brexit vote, according to recruitment firm Indeed.

The company’s research shows the State recorded the second largest increase in its share of searches for jobs in Europe between 2015 and 2017, coming in behind Luxembourg.

Researchers analysed the online search patterns of millions of jobseekers across the EU15. They found that while the UK remains the most popular choice, its attractiveness is waning in the wake of last year’s vote to leave the European Union.

Germany, the second most popular country, saw its share of searches rise by a fifth (19.3 per cent), while the Republic’s rose by a third (33.6 per cent) and Luxembourg’s by 56 per cent.

The analysis also reveals that Ireland’s booming jobs market and the waning appeal of working in the UK prompted a 16.5 per cent fall in the proportion of Irish jobseekers hoping to move to Britain.

It’s a similar picture in Poland as the research shows that between 2015 and 2017 the proportion of jobseekers in Poland looking for work in Britain fell by 11.4 per cent.

“For much of the past decade Britain’s dynamic labour market has made it a poster boy for ambitious Europeans keen to progress their careers. Last year’s Brexit vote hasn’t stopped that attractiveness in its tracks, but it is clearly giving many European jobseekers pause for thought.

“So while the UK is still the most popular destination among Europeans looking to work abroad, its lead is shrinking fast.

“Britain’s loss could be its rivals’ gain – and Ireland, Germany, and France are all attracting a greater share of the interest from upwardly-mobile EU citizens.

“It will be interesting to see if recent political events, suggesting a softening of the UK’s position on Brexit, will stem the decline that’s being seen in the UK’s attractiveness to European jobseekers.”