How tracking staff boosts revenue – and why we should worry 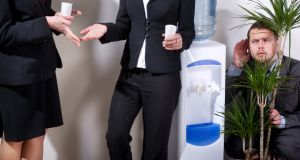 Humanyze gathers data from ID badges hung around people’s necks that have microphones and sensors that know where you are and who you are talking to. Photograph: Getty

I had breakfast the other day at a swanky London brasserie with a man I recently met at a conference.

I sauntered into the office some time after 10am, stuffed with eggs Benedict, and switched on my computer. Having checked a few emails and scrolled through Twitter, I headed to the office kitchen for a cup of tea, where I bumped into a colleague who agreed it was good to see that the moody hot-water boiler was not on the blink.

Then I started chatting with another colleague about a film we had both seen starring Willem Dafoe, which we thought was brilliant but a bit depressing. Eventually I sat down to write something.

My employer had no clue about any of this essentially useless office activity. Nor would most large companies. Yet that breakfast has made me wonder how long it will be until they do. The man I met at the brasserie was Ben Waber, chief executive of a Boston company called Humanyze that claims it can boost a company’s revenues by tracking what its employees actually do all day.

It gathers data from ID badges hung around people’s necks, a bit like the ones employees use to swipe into work, only these have microphones and sensors that know where you are and who you are talking to – though not what you are saying.

I arranged to meet Mr Waber because, although I knew companies had been testing worker-tracking gadgetry for years, I had not heard anyone spell out the financial pluses of such surveillance. If Mr Waber is to be believed, they are significant.

At a conference on the modern workplace in London this month, he described Humanyze’s work for a large European bank that wanted to know why people selling loans in some of its branches were performing vastly better than those in other offices with similar types of customers.

Humanyze discovered the star branches had close-knit sales teams who worked well with each other. Teams in the dud branches were separated on different floors, or got on so well they left new employees in the cold. The bank made some simple tweaks, rotating staff around different floors or giving managers €100 a week to take new employees out to lunch with longer-serving workers. This helped lift the bank’s overall performance by more than 10 per cent, according to Mr Waber, who claimed this amounted to hundreds of millions of euro in extra sales.

This sounds very large to me and, if I were in a position to hire a company such as Humanyze, I would want to see hard evidence. But the point is, it is easy to see why more employers are being tempted to snoop on their staff, and that is worrying.

When journalists at London’s Daily Telegraph newspaper office discovered relatively unsophisticated motion-tracking boxes under their desks last year, there was such an outcry the devices were quickly removed.

Other companies are developing smart office chairs that know if you are sitting on them, as opposed to yakking about Willem Dafoe, which adds a whole new meaning to the idea of the bottom line.

Humanyze offers a different level of scrutiny. Today it has fewer than 40 employees and has worked with some two dozen companies, including a large oil group and three banks. But Mr Waber is hiring about eight people a month and has just agreed to a partnership with a big ID card supplier that means his systems should soon spread to many more companies.

I like Mr Waber. He is a thoughtful ex-Harvard researcher who wrote the book on so-called people analytics. I believe him when he says Humanyze anonymises its data, only gives its badges to consenting employees and wants to make people more productive, not outraged. He clearly likes analysing things we loathe about office life: the endless hours in meetings; who talks over others most; which bosses ignore their underlings.

But Humanyze is just one of many companies entering this field and it is hard to imagine all acting honourably. Mr Waber wants more regulation to weed out cowboys. That is good. But until then, I know I will not be alone when I say that the day my bottom starts spying on me is the day I start looking for another job.