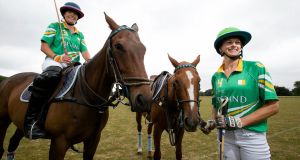 Irish racehorses are being retrained as polo ponies as owners across Europe look for alternatives to increasingly expensive but top-rated Argentine bloodstock for the sport.

Wicklow-based Siobhán Herbst, who is a professional polo rider herself, is developing a business retaining the horses and then finding markets for them abroad. Ms Herbst said there is great demand for the sports horses, having sold 30 horses abroad last year into countries including Britain, Germany, France and Spain.

“The Irish racehorses are very adaptable, have speed and stamina and are very intelligent and proving to be a great alternative to very expensive Argentinian ponies,” she said.

It also runs an annual International Ladies Polo Tournament in aid of the Irish Injured Jockeys Fund at the All Ireland Polo Club in the Phoenix Park, Dublin – the oldest polo club in Europe, having been founded in 1873 – which takes place next weekend.

Alongside some of the world’s leading riders, this year’s event will feature a Trainers versus Jockeys contest, featuring some of Ireland’s top current and recently retired race jockeys.

One of the teams will be managed by trainer Jessica Harrington, whose father, Brian Fowler, won a silver medal the last time the event featured in the Olympics – in Berlin in 1936. Noel Meade will also manage a team. Harrington’s daughter, amateur jockey Kate, is a team captain.

Herbst is the family behind Herbst software, which started as a business providing business management solutions to the agri sector and has since expanded to the broader SME market.