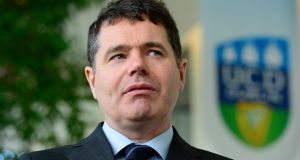 What is new Minister for Finance Pascal Donohoe dreaming up for October 10th?(Photograph: Cyril Byrne / THE IRISH TIMES)

It’s just 10 short weeks until Budget Day 2018, a time when Pascal Donohoe will walk down the steps of Leinster House with a briefcase tucked under his arm for the first time.

But what might the contents of his debut budget hold? Well, as always, some insight into the various permutations and combinations of tax changes was published yesterday in the form of notes from the Tax Strategy Group, with measures of potential interest to individuals, summarised below.

Despite recent increases in the threshold, the yield from CAT has risen steadily from 2014, with a forecast yield of €440 million for 2017. And further increases are likely, given the Government’s previous commitment to increasing the Category A, or parent/child relationship, threshold to €500,000 over the coming years, up from €310,000 at present.

However changes to other categories may be unlikely. As the report notes, “a significant element of the yield from gifts and inheritances arise from the Group B threshold”, and so increasing the threshold would be “very expensive”.

It’s been steady at 33 per cent since 2012, and hence far more attractive than the tax levied on savings, but there have been consistent calls to make the tax paid on gains more attractive for entrepreneurs.

So what might Budget 2018 bring? Firstly the rate could be changed, although as noted, each 1 per cent reduction in the rate of CGT would be estimated to reduce yield by about € 25m annually. Another approach could be to increase the rate of tax paid on larger gains. “For example the first € 50,000 could be charged at the current rate of 33% and a higher rate of 34% could be applied to the balance”. This is a system that has been adopted in Finland and Denmark.

For entrepreneurs, the amount of chargeable gains eligible to tax at 10 per cent could be increased to €5 or €10 million, at a cost of €49 million and €54 million respectively.

Another area that could be due a change is with regards to principal private residence relief, which allows gains to be made on the sale of a home free of tax.

According to the report, the relief could either be abolished or amended, which could see properties only up to a certain value being eligible, or a lower rate of CGT could be applied to any gain arising. Another method could be to only grant relief where the gains are used to buy a new home, as is the case in Portugal. Limiting such relief could be politically unpalatable however.

Tobacco and its replacement products may yet prove to be a bone of contention in this year’s budget. As the report shows, the price of a pack of 20 cigarettes over the last fifteen years has increased from € 5.87 in 2003 to € 11.30 in 2017, and Ireland has the highest rates of duty on tobacco products. However there is still scope for increases, and the TSG have suggested an increasee of up to € 1 on tobacco.

On the other hand, the report does not recommend applying excise on vaping products at this time, given the difficulties in collecting the excise, and given that many sources consider e-cigarettes to be a cessation tool and certainly less harmful than cigarettes.

Dirt on savings and investments

It has risen steadily over the past decade, up from 20 per cent in 2008 to 41 per cent until 2016, but is now on a downward trend. Last year the rate on savings was cut to 39 per cent, and further cuts are on the way, given the declining yield on the tax due to the bottoming out of interest rates. The projected yield for 2016 for example, is just €175 million, down from €435 million in 2014,

Dirt is due to fall by 2 per cent each year over the next three years to hit 33 per cent by 2020. However, the group did suggest re-introducing the “non-standard rate of Dirt, which applied to interest earned on a deposit where the interest could not be calculated annually or more frequently. This could see a higher rate of Dirt of 40 per cent being introduced for these products from January 2018.

The group also said that there may be “ perceived scope” to remove the age exemption on those who pay Dirt, although it added, “any additional tax burden imposed by the charging of Dirt on the interest of the over 65’s would largely fall on the less well-off and is inappropriate at this time”.

Of interest to both consumers and the life industry is what might happen to exit tax, which is charged on investment products, and still applies at a rate of 41 per cent. The yield from this tax is forecast to grow to a ten year high of €238 million this year.

While the life industry has previously called for the tax to be brought into line with Dirt, doing so has been estimated to cost the Exchequer € 14 million per year. And as the group notes, “It is possible that a higher rate of return could be achieved on investment products compared to deposit accounts even with higher rates of taxation”.