Myth of stressed bosses thriving by building resilience is decadent 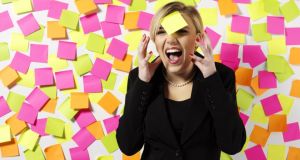 “Our message to executives who crack up is that it is their fault for not having enough of something that has become the corporate world’s most fashionable virtue: resilience.”

There are few jobs with less appeal than being the chief executive of a big company. The work is intolerably stressful. It is lonely. You never see your children. You spend far too much time breathing stale air in a pressurised cabin 36,000 feet up. And it generally ends in big, humiliating failure.

Johnson & Johnson, whose Human Performance Institute has spent more than 30 years studying the behaviour of athletes and other fanatics, has come up with a way of making the job manageable: a $100,000 anti-burnout programme.

The chief executive is packed off to the Mayo clinic for a few days during which their insides are methodically prodded and X-rayed.

Then three experts are called in – a dietitian, a physiologist and a coach – who over the next nine months interview the executives’ families, poke around in their fridges, then tell them what to eat, how much to exercise and how to change their characters.

Or, as the company puts it on its website: “The Premier Coaching Team leverages holistic Physical, Mental, and Emotional Analyses to create highly personalised action plans.”

I have no doubt Premier Executive Leadership™ will be in great demand. I once read that 40 per cent of chief executives quit or are fired in the first 18 months. Executive burnout is not only a downer for the person but for shareholders too.

According to research by consulting firm Strategy&, a chief executive resignation at one of the world’s largest companies can knock its value by $1.8 billion (€1.7 billion). Compared with that a $100,000 insurance policy seems like a cheap solution.

Premier Executive Leadership™ does not solve a thing. It merely adds to the problem. We put someone under inhuman pressure by placing impossible demands on them. They often crack.

Then instead of wondering how to lessen the pressure, we tell them all will be fine if they eat every three hours, exercise more, behave differently and fill up their already full schedule with a trio of quacks.

If expectations were lower, pressure would be less. Better still, the nice humble people who are supposed to be better at the job might be more interested in applying, instead of the narcissistic nutcases the system produces

It is not just decadent, but also damaging. Our message to executives who crack up is that it is their fault for not having enough of something that has become the corporate world’s favourite and most fashionable virtue: resilience.

At the same time, we are hoodwinking companies into thinking resilience can be bought. So long as the programme is “holistic” and “personalised”, a chief executive can be turned from a frail human into a superhero.

There is a better, more obvious and cheaper way. Instead of attempting to shore up the incumbent, we should change the job spec. Being a chief executive is awful for four reasons. First, people think that you are in control, but you are not.

All organisations are dysfunctional and even if you have the right idea of what you want to do, doing it is practically impossible. Second, everything is always your fault, even when you have had nothing to do with it. Third, it is very lonely. No one tells you the truth and you cannot tell anyone else the truth either. Finally, you spend your life in two of the most depressing spaces on Earth – meeting rooms and aircraft.

The best way of lifting pressure is to spread the load. That means fussing over the other people at the top – the chairman, deputy and three or four important others.

The next is to do less. Does the chief executive really need to speak at a conference on the other side of the world? The answer is almost always no. Most meetings need not take place.

But the most important thing – which no one company can do alone – is to change expectations of what a single person can achieve. Academics have debated for 70 years how much the chief executive matters, and most studies conclude they do not matter much.

If expectations were lower, pressure would be less. Better still, the nice humble people who are supposed to be better at the job might be more interested in applying, instead of the narcissistic nutcases the system produces.

A recent study showed the proportion of psychopaths in corner offices is the same as in prisons.

Under this job spec – shared power and scant chance of ever being on the cover of Time – two desirable things might occur, which hardly ever happen together in a free market. The standard of chief executive applicants would rise. And pay would fall. – (Copyright The Financial Times Limited 2017)