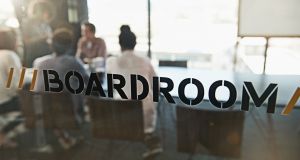 Institute of Directors survey: 80 per cent of respondents said their organisation adhered to a specific ethics code. File photograph: iStockPhoto

Conflicts of interest are widespread within Irish boardrooms, according to almost half of the respondents to an Institute of Directors survey.

The issue of conflicts of interest was one of the weakest areas of Irish board practice, one respondent said, while another suggested it was a consequence of Ireland’s relatively small size.

Just under a quarter of respondents did not believe conflicts of interests were “prevalent” in Irish boardrooms, while another quarter did not have a view.

While 97 per cent of respondents had an awareness of what constitutes a conflict of interest for a director, one in five said their board did not have a conflict-of-interest policy.

Taken as a whole, the findings suggest that, at best, there is a lack of understanding when it comes to the level of conflicts of interest in Irish boardrooms, the institute said.

In terms of how conflicts of interest are monitored by boards, the overall response showed a high degree of ambiguity and lack of structure, it said.

The findings on the issue of conflicts of interest were in contrast with most other answers to the survey, which reported relatively positive views on corporate governance and ethical issues within the respondents’ own boards and companies.

Among the survey’s findings was that 86 per cent of respondents believed there had been an increased focus on business ethics in Irish boardrooms over the past decade, with fear of reputational damage, a response to recent controversies, and increased public scrutiny, being the drivers for this change.

Only 6 per cent of respondents did not feel their organisations responded appropriately to ethical or compliance failures.

The survey involved 431 respondents, from multinationals, semi-State organisations, SMEs and plcs and included senior management and executive and non-executive directors.

“Directors are far more aware of their responsibilities than they once were, but there is still some way to go regarding the declaration and monitoring of conflicts of interest.”

Furthermore, 40 per cent of respondents said their chair’s ethical behaviour is not monitored, or that they did not know whether it was monitored. The institute said that while it appeared the chair had a central role to play in dealing with conflicts of interest and other matters, “it would appear that the ethical behaviour of the chair is itself not adequately monitored”.

A copy of the survey will be available on iodireland.ie from late Thursday morning.

1 Explainer: what is the row about SF’s multinational tax plan?
2 Getting out from under ‘never-ending’ Celtic Tiger debt burden
3 Britain after Brexit will not be alone, but it will be lonelier
4 Personal insolvency practitioner to pay €6,000 after providing misleading details
5 Banks withdrawing from ATMs – another failure of regulation
6 Fair Deal nursing homecare leaves little for bills and gifts
7 Pensions: Estonia plans to unleash a potential €4.85bn on economy
8 Pensions row fix could threaten future of State payment, actuaries warn
9 Portugal set to curb tax breaks for wealthy foreigners
10 Election 2020: Parties' pledges on housing simply don’t add up
Real news has value SUBSCRIBE