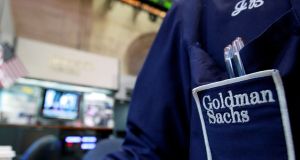 A trader works at the Goldman Sachs stall on the floor of the New York Stock Exchange. The bank has become the latest Wall Street finance house to abandon its stuffy dress code in favour of a “flexible” approach. Photograph: Brendan McDermid/Reuters

Goldman Sachs has become the latest Wall Street bank to abandon its stuffy dress code in favour of a “flexible” approach likely to find favour with the millennials the company is trying to hire.

Goldman’s new chief executive David Solomon, whose penchant for weekend DJ-ing already stands to put him in good stead with the firm’s younger workforce, announced the move in a memo.

The change comes three years after a similar pledge by JP Morgan Chase, though staff there say take up of “casual everyday” has been limited, in part because bankers fear showing up in jeans will alert their bosses to the fact that they have no meetings that day.

Goldman Sachs itself brought in a casual dress code for its 8,000 technology staff almost two years ago, but maintained a more formal approach for the rest of its 36,000-strong workforce, including an explicit ban on “short trousers” for men.

One insider said engineering workers “absolutely” embraced the relaxed dress code, adding that “some (juniors) had to be counselled against ripped and overly tight T-shirts”.

Tuesday’s memo – co-authored by Mr Solomon, Goldman president John Waldron and finance boss Stephen Scherr – does not specify items of clothing that are banned or encouraged, instead telling staff to dress in a manner that is consistent with their clients’ “expectations”.

“Of course, casual dress is not appropriate every day and for every interaction and we trust you will consistently exercise good judgment in this regard,” adds the memo. “All of us know what is and is not appropriate for the workplace.”

Bank dress codes have generally become less prescriptive in recent years. Jamie Dimon, JP Morgan’s chief executive, is often pictured without a tie, as is the bank’s president Daniel Pinto, while Citi’s president, Jamie Forese, is known for wearing a sport-style gilet in the office. Dress codes for women, who are slowly occupying a greater number of senior seats on Wall Street, are also typically more vague.

Still, the loosening of the rules at Goldman has added significance as part of the bank’s evolution under Mr Solomon, who took the reins on October 1 after Lloyd Blankfein’s 12 years at the helm.

Mr Solomon has promised a new era of transparency, including more detailed quarterly financial statements, the first instalment of which was warmly received by analysts in January.

He is also reviewing strategy and resource allocation across the company, which is likely to result in a further pivot away from its investment banking roots into consumer banking and other new areas. – Copyright The Financial Times Limited 2019