Deal will be seen as benchmark for other sectors 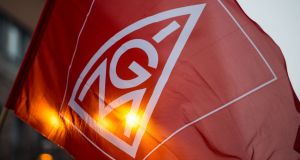 An IG Metall flag. The two-year agreement struck between IG Metall and the Südwestmetall employers’ federation covers 900,000 workers in the metals and electrical industries in Baden-Württemberg, home to industrial group such as Daimler, the carmaker, and Robert Bosch.

IG Metall, Germany’s most powerful union, has won a 4.3 per cent wage increase and the right to a 28-hour working week in a landmark deal that will be seen as a benchmark for other sectors.

The agreement shows how strong a hand Germany’s economic boom has given the unions in wage negotiations this year. Last year the economy grew at its fastest rate since 2011 and unemployment is at its lowest since reunification in 1990.

The terms of the deal, reached on Tuesday after six rounds of often bruising talks and a series of 24-hour strikes, also demonstrate how the pursuit of a better work-life balance is now just as big a priority for organised labour in Germany as winning big wage increases.

The two-year agreement struck between IG Metall and the Südwestmetall employers’ federation covers 900,000 workers in the metals and electrical industries in Baden-Württemberg, home to industrial group such as Daimler, the carmaker, and Robert Bosch. But it is likely to be rolled out across the whole country.

It envisages a 4.3 per cent wage raise from April, and other payments spread over 27 months. Workers will be allowed to reduce their working week from the standard 35 hours to 28 while preserving the right to return to full-time work.

“The wage settlement is a milestone on the path to a modern, self-determined world of work,” said Jörg Hofmann, IG Metall’s chairman.

Barclays analysts said it works out at an average 3.35 per cent annual wage rise and said that based on its model, overall negotiated wages, which cover 45 per cent of all German workers, will rise by only 2.2 per cent over the coming year.

Germany’s collective bargaining talks have been watched closely by the European Central Bank, which would be better able to hit its inflation target if wages in the eurozone’s largest economy were to rise. Mario Draghi, the ECB chief, has said wages need to grow before the bank can unwind its crisis-era stimulus measures.

However, some economists believe many German workers are now so comfortably off that they are more interested in securing a better work-life balance than higher salaries.

Mr Hofmann said the deal would have a “positive effect” across the economy, with the “significant increase in incomes strengthening domestic demand”.

IG Metall had pushed for a 6 per cent annual rise and had held a series of 24-hour strikes to press its demands. It also threatened to ballot its members on extended industrial action if employers failed to budge.

Stefan Wolf, Südwestmetall’s negotiator, said the award was a “burden, which will be hard to bear for many firms”. But he said the long duration of the deal would allow companies to better plan ahead. The deal would work out at below 4 per cent per year to employers, he said.

Workers will receive a one-off payment of €100 for the first quarter of 2018, and, from 2019, a sum equivalent to 27.5 per cent of their monthly salary as well as an additional fixed annual amount of €400 — though this can be postponed, reduced or cancelled if economic conditions deteriorate.

Workers who need more time to look after children or elderly relatives can take eight additional days off work in lieu of the extra payment, two of which would be paid for by their employer.

In return, companies will be able to offer more 40-hour a week contracts, at times when there is a shortage of skilled workers. “Employees have more opportunities to reduce their hours of work while companies get more options to increase the volume of working hours,” Mr Wolf added.

1 Explainer: what is the row about SF’s multinational tax plan?
2 Getting out from under ‘never-ending’ Celtic Tiger debt burden
3 Britain after Brexit will not be alone, but it will be lonelier
4 Personal insolvency practitioner to pay €6,000 after providing misleading details
5 Banks withdrawing from ATMs – another failure of regulation
6 Fair Deal nursing homecare leaves little for bills and gifts
7 Pensions: Estonia plans to unleash a potential €4.85bn on economy
8 Pensions row fix could threaten future of State payment, actuaries warn
9 Portugal set to curb tax breaks for wealthy foreigners
10 Election 2020: Parties' pledges on housing simply don’t add up
Real news has value SUBSCRIBE