Border threatens to put the brakes on Fermanagh tyre business 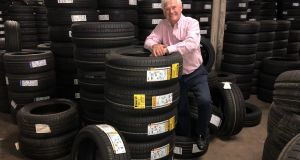 Modern Tyres director Jimmy Byrne: “I’m terrified of Brexit. We’ve been through it already up here, when we had border posts and had to go through customs checks every day. Nobody knows.”

Dublin man and Modern Tyres director Jimmy Byrne dreads the return of a hard border. Byrne was born in Harold’s Cross in Dublin and followed in his father’s footsteps by starting work in a tyre-remoulding factory in Cabra.

He’d always talked about opening a remoulding factory himself and an opportunity arose when a colleague discovered a disused mill in Lisbellaw, Co Fermanagh. It was available for rent at £8 a week. That prompted Byrne to make the move from Dublin and set up Modern Tyres north of the Border.

“That was in 1965 and the remoulding was going really well until the Troubles started in around 1969. We had two really bad fires in 1969 and 1971 and we couldn’t stay because we lost all our equipment.”

Byrne and his team of about 12 people moved to Enniskillen and were forced into retailing and wholesaling as opposed to manufacturing.

“That really changed our business because of how close to the Border we were, crossing it daily. That meant customs checks, police checkpoints and army checkpoints.

“Frequently we had to unload at a checkpoint, take all the tyres off and, of course, the customs officer would walk away after you did the paperwork and our man would have to reload themselves.”

It was a dangerous time, said Byrne. The impact of the Troubles was also impacting on his life outside the business.

“On one occasion I bought a house in Leixlip, just in case we had to move quickly. I have four boys, but it was okay for them: Enniskillen is a particularly neutral sort of an area.”

It wasn’t just the Troubles that was causing problems for Modern Tyres. The recession in the 1980s meant the business was hit with high interest rates.

“We had interest rates of 17 and 18 per cent, along with military checkpoints everywhere. We also had to have parity of numbers with Catholic and Protestants working for us, and we had to do a lot of paperwork for that, to make sure the balance was right.”

However, by the end of the 1980s and into the 1990s, Modern Tyres was beginning to expand rapidly. It acquired outlets from Cork-based Hanover Tyres. They also bought an operation from Continental Tyres, which had 12 depots in Northern Ireland.

At one stage, Byrne travelled around Ireland visiting depots. Now, his four sons do the travelling for him. “Rory lives in Newry and operates the Newry depot, Shane works in Omagh, Conor and Niall both work in Enniskillen.”

They now have 45 depots nationwide, with 215 employees. “You’re never more than 15 miles from a Modern Tyres depot,” he says.

Modern Tyres still concentrates on retailing, and they also have fitting depots. For Byrne, the most recent recession wasn’t as challenging as it was in the 1980s.

“Tyres are a stress purchase. They aren’t something that people wake up on a Monday morning and say, ‘right, I’ll spend a couple hundred pounds on four tyres’.

“We buy a lot of our tyres from China at the minute. We also buy a lot from Holland; we represent a Dutch company called Vredestein.”

Byrne describes the tyre business as a competitive one, where it’s difficult to get the staff they want – particularly south of the Border, where there’s also a difference in the cost of living.

Brexit is a big concern. “I’m terrified of Brexit. We’ve been through it already up here, when we had border posts and had to go through customs checks every day. Nobody knows. We’re apprehensive and it’s the uncertainty that’s getting to us.”

The current political impasse in Stormont also means there is no one making decisions – including Enniskillen politician Arlene Foster. “It’s a shame,” said Byrne. “I have great admiration for Arlene, I’m very friendly with her. I could talk to her no problem at all. She’s very helpful.”

Modern Tyres now has an annual turnover of €40 million. Next on the agenda is rapid expansion in the Republic. “We’ve virtually saturated the north of Ireland. All the potential is down below now.

“We have to be actively looking for acquisitions. We have competitors coming out of the woodwork, but the fact we’ve been running for so long gives us an advantage.”