Sacking staff is difficult but let’s be adult about it 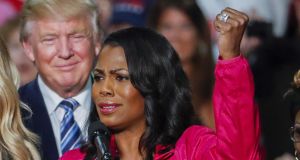 Donald Trump with Omarosa Manigault in 2016. The former White House aide has caused a stir with what she says is a recording of her sacking by the president’s chief of staff. Photograph: Erik S Lesser/EPA

I doubt I will ever forget the first time I fired someone.

The casualty was a young reporter, unfairly thrust into too big a job at an outfit too small to offer suitable work. There were tears. There was shock. I still hate to think of how badly I handled it.

The one thing there was not, though, was a secret recording of the sacking, like the one that Omarosa Manigault Newman says she made when she was fired from the White House in December.

Ms Manigault Newman, a contestant on The Apprentice-turned-White House aide, caused a stir last week when she plugged a tell-all book with what she said was a recording of her booting by chief of staff John Kelly.

President Donald Trump’s response – he called her a low-life “dog” – suggests the recording was genuine, which makes it very unusual. People are fired all the time around the world and a lot of them have a smartphone. Yet we rarely see or hear a sacking.

The closest a lot of us get is a Hollywood film like Up in the Air, where George Clooney plays a man who fires people for a living. Or reality television shows like The Apprentice, still going in some countries 14 years after Mr Trump hosted its first season in the US. Part of the show’s appeal is surely the glimpses it offers of the horror of the sack, a disaster that can take longer to recover from than either divorce or the death of a spouse.

I would not know because thankfully I have never been fired. I came close as a university student, when I took a telephone marketing job, selling ads for a business directory that I was never sure actually existed.

I failed to make a single sale and would have certainly been shown the door if I had not taken the precaution of sacking myself first.

Smartphones had not been invented then but even if they had, I cannot imagine I would have had the gumption to covertly record a sacking.

I am still astonished when I hear of people who do, though I can see why it happens.

Not that long ago, a man I know was thoroughly stitched up by bosses who made him a scapegoat for a superior’s mistake.

They hauled him in for a disciplinary hearing where he was so sure he would be unfairly treated that he took in a hidden tape recorder.

Unhappily, the device was discovered and he was fired on the spot for deception. The reaction was understandable but I still think he was mistreated.

So would it make any difference if more sackings were made public?

Probably not. An enormous amount is written on the right way to fire someone: always do it in person and never without a warning. Don’t blather on with small talk. Be direct but also compassionate. Never say anything like “I know how you feel”, because you almost certainly don’t.

But ultimately there can never be a truly good way to fire someone. It is a horrible thing to endure and only a psychopath could enjoy doing it.

The dread of dismissal is so profound that workers will openly round on a boss for firing a troublesome colleague – even if the casualty is so repellent that the entire office has been dreaming of their disappearance for months.

For this reason, I have a lot of time for the bracing approach taken by Netflix. The online entertainment company calmly states on its website that its idea of a great workplace has nothing to do with “sushi lunches” and fancy offices.

It sees itself as “a team, not a family”, where people are paid well but shown the door if they fail what it calls the “keeper test”: managers have to think about whether they would try hard to keep someone from leaving for another firm. If the answer is “no”, a merely adequate performer is supposed to be promptly offered a generous severance package so a star replacement can be found.

I am not sure I would want to work there myself and obviously not every company is big enough to afford such a policy.

But it does have two big advantages. It treats its staff like grown-ups and it is honest about an unavoidable truth: companies do not exist to make life joyous for their employees. – Copyright The Financial Times Limited 2018