Agile is not necessarily flexible in the workplace

The terms are often used interchangeably, but they’re not the same thing 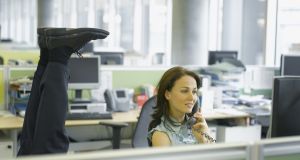 Properly agile? There is little point splitting an organisation into so-called agile teams if it is still underpinned by a slow-moving central bureaucracy. Photograph: iStock

Flexible working is largely about time. It allows employees to work their hours outside the normal 9-5 constraints and may extend to working from home for one or more days a week.

Agile working is not really about time at all. It’s a mindset that encourages independent thinking and pushing the boundaries around the who, what and when of working.

IT professionals first coined the term to describe specific aspects of software development. However, agile practices quickly became an integral part of the tech sector as a whole before moving into the wider business community as techies joined multidisciplinary teams in other industries. Agility is second nature in the start-up world, and most of the big tech-driven companies were born agile not least because they had the infrastructure to support it from the get-go.

In this brave new world of agile working, however, established companies with traditional hierarchies are generally seen as lagging behind. But even behemoths can become agile if they put their minds to it.

A case in point is the German multinational engineering and technology giant Bosch, which employs more than 400,000 people and operates in about 60 markets.

A number of years ago, it effectively dumped seven layers of organisational bureaucracy in favour of a dual structure that left traditional functions alone but ran its new and emerging revenue strands with small teams that could respond quickly to the dynamics of its marketplace.

Mary Harrison, managing director of Irish training consultancy Optimum, which has just launched an agility-themed training programme aimed at SMEs, says agility is not something this sector can afford to ignore either.

“Small companies often find it difficult to attract and retain top talent, which is why it is important for them to be able to offer agile working as an option,” she says. “Agile working empowers people to work with maximum flexibility and minimum constraints and it is certainly one of the things future-proofed SMEs need to be thinking about.

“It’s going to be a new concept to many of them but it’s doable when broken down into key areas such as putting agile working in place and managing the issues that flow from it such as dealing with virtual teams and remote working.”

Agile teams are typically small and multidisciplinary. They’re also self-starting and confident enough to ditch the plan if it’s getting in the way of progress. They are often used to tackle complex problems because they’re good at breaking complexity into bite-sized chunks and coming up with solutions for each “chunk” before blending them together into a single solution.

Agile working is also known as ABW or “activity-based working”, and it’s not something an organisation can decide to do overnight. And it may not suit every business or indeed every department within it. For example, it’s typically more suited to software and product development tasks than to finance.

To date, the concept has largely been tried with small teams focused on innovation and, overall, it has been successful. However, scaling it up to other functions can be problematic, and there is little point splitting an organisation into so-called agile teams if it is still underpinned by a slow-moving central bureaucracy.

Giving people a lot more self-determination is also not without its challenges. It immediately raises an issue around trust. Letting people “loose” to do it their way is not something most mainstream business cultures feel comfortable with.

If it works, however, the payback is potentially attractive.

It should, in theory, create organisations that can rapidly respond to change without the pain normally associated with fast-moving evolution.

Introducing agility into a business is not about one thing. It’s about four – the organisation, the people, the culture and the workplace – and it requires different work practices, new behaviours and different “rules” and assessment methods. It may not be clear initially how many agile teams a business might need and it can take time to implement as embedded structures, and practices may have to be changed gradually to avoid plunging an organisation into disarray.

But fortune favours the brave and, in 2015, the Dutch-based financial services multinational ING decided on a “big bang” transition from traditional to agile. Almost overnight it dismantled a large part of itself and reorganised into a series of tribes, squads and chapters as part of its new WoW – way of working – initiative.

It was prompted to take such radical action by changing customer expectations that were being shaped by the easy user interfaces of social media and streaming platforms.

Tribes were groups of around 150 people, squads were cross-disciplinary units of nine people or fewer and chapters co-ordinated people from the same discipline who were working across different squads. Squads stayed together until a task was complete (which gave a strong sense of ownership) and well-functioning squads were left together and the members moved as a group on to the next task. This improved performance, satisfaction and engagement.

At the heart of ING’s shift are empowered, high-performance teams that set their priorities based on customer feedback and constant learning with what the company describes as “the bigger picture in mind”. It prefers to reuse than reinvent, and organises for simplicity.

ING says its mass foray into agility has worked.

Both its customers and employees are happier and corporately it’s happier, too, because it’s getting new products to market faster.