Why Unilever is shaking up the archaic way people are paid

What if people lower down the pay ladder had a chance to take part in the executive share scheme? 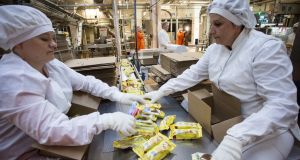 Unilever has 158,000 staff and it spends about €6.5 billion a year on their pay. Most are remunerated in the same way that people in big companies have been paid for decades. They get a fixed salary

Unilever is one of those big, old companies that people rarely think about but seldom manage to escape.

If you have ever slathered yourself in Dove soap, washed down toast and Marmite with a cup of PG Tips, smeared Vaseline on your lips or scoffed a Pot Noodle, you have entered the world of Unilever.

The British-Dutch group’s goods are so rife it is easy to believe its boast that 98 per cent of UK households have at least one of their products on their shelves.

The company has had its ups and downs since it began in the 1800s, most recently last year when irked shareholders forced it to abort a plan to ditch London as one of its two head offices and opt for Rotterdam alone.

When every euro counts, why risk losing a cent to a bonus you might not get?

But a year ago, it quietly began an experiment on a part of working life that is as pervasive as its products: employee pay.

Unilever has 158,000 staff and it spends about €6.5 billion a year on their pay. Most are remunerated in the same way that people in big companies have been paid for decades.

They get a fixed salary; a pension and other benefits and a bonus that depends on how well they perform each year. Its 14,000 senior managers and executives can also take part in a scheme that can more than double their bonus if they invest it in Unilever shares.

None of this is revolutionary. Lots of companies try to align the interests of the business with employees, especially well-paid executives.

But what would happen if people lower down the pay ladder had a chance to take part in the executive share scheme? And what would those people do if they were also allowed to convert more of their fixed pay and benefits into a bonus or, conversely, turn more of their bonus into fixed pay?

Peter Newhouse, Unilever’s global head of reward, was keen to find out, which is where the experiment came in. Mr Newhouse has long thought the traditional package of a fixed salary and one-size-fits-all benefits is “archaic”. He thinks it would be better for both workers and businesses to tailor pay according to people’s needs.

To test the theory, Unilever last year selected about 200 staff in the UK, the US and the Netherlands. Some were middle managers, others had no supervisory role. Each was told they could join the executive share scheme and then, if they chose, shift the balance of their pay to take more or less of it as a bonus.

Here’s what happened: 20 per cent decided to put their entire bonus into the executive scheme and 20 per cent chose to shift the balance of their fixed and variable pay. But there were some revealing differences.

Twice as many people on higher salaries chose to shift the balance of their pay, compared with those on lower pay, and all the better-paid people went for more bonus.

Of the lower paid staff who shifted, 90 per cent chose more fixed pay.

That makes sense. When every euro counts, why risk losing a cent to a bonus you might not get?

Mr Newhouse says the test showed people like being given more of a choice on pay, which I suspect is correct. But the idea also relies on something many companies lack: a trusted performance review system. No one is going to give up a guaranteed salary for a performance-related bonus if they do not trust managers to assess their work fairly.

Unilever does not plan to roll out the system across the company immediately. It would require a huge administrative effort. But Mr Newhouse is keen to keep looking at ways to make pay more flexible. If an employee has a partner at another company with full medical cover, for example, it might make sense to swap that benefit at Unilever for a higher salary or bonus.

Either way, he does not see a future for the traditional pay package people cannot personalise.

“It’s quite Dickensian,” he told me. “I’m convinced that when we look back in future at what we do now we’ll think, ‘My goodness me, why did we do that for so long?’” – Copyright The Financial Times Limited 2019