Measures have the potential to jeopardise ‘inversion’ of Pfizer with Allergan 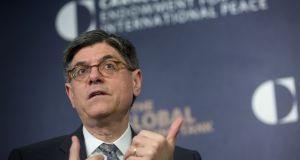 US treasury secretary Jack Lew said the new restrictions would “further rein in inversions and reduce the ability of companies to avoid taxes”. Photograph: Andrew Harrer/Bloomberg

The US government has taken steps to crack down further on tax-avoiding corporate “inversion” deals involving American corporations merging with overseas companies in countries such as Ireland.

The treasury department and the Internal Revenue Service, the US tax collection agency, unveiled the third round of measures since September 2014 aimed at limiting overseas mergers involving US companies shifting their addresses overseas to avoid American taxes.

Irish-based corporations have been among the most popular inversion targets of American companies because they allow the firms to benefit from the lower Irish corporate tax rate of 12.5 per cent, instead of the 35 per cent rate of American corporate tax.

The new restrictions have the potential to change or jeopardise proposed transactions, including the inversion of US pharmaceutical giant Pfizer with Dublin-based Allergan announced last year that is due to be finalised later this year.

US treasury secretary Jack Lew said that past actions had taken away some of the economic benefits of “inverting” from companies and “helped slow the pace of these transactions”.

“But we know companies will continue to seek new and creative ways to relocate their tax residence to avoid paying taxes here at home,” he said.

Mr Lew said that the new restrictions would “further rein in inversions and reduce the ability of companies to avoid taxes through earnings stripping”.

He warned that inversions could only be stamped out fully with new legislation passed by Congress, a move that Democrats and Republicans support but cannot agree on how to go about doing so.

Among the actions taken is a rule disregarding the shares a foreign company can attribute to previous inversions or acquisitions of US companies enabling them to complete even larger inversions.

This move is targeted at what the US government calls “serial inverters” – companies created by multiple takeovers of US firms.

The restriction imposes a three-year limit on foreign companies bulking up on US assets to avoid ownership rules for future deals.

A spokeswoman for Pfizer told The Wall Street Journal that the company was reviewing the impact of treasury’s new rules but declined to comment on their effect on the deal with Allergan.

Barack Obama’s press secretary Josh Earnest said in a statement that the president was “pleased” that the treasury was acting again to discourage companies from taking advantage of a tax loophole.

“Business decisions should be driven by genuine business strategies and economic efficiencies, not accounting gimmicks that game our broken tax system,” he said.

Tax inversions have been condemned by Mr Obama in the past as “unpatriotic” and are often attacked by Democratic and Republican presidential candidates hoping to succeed him in the White House.

Hillary Clinton, the Democratic front-runner, has decried the $16 billion (€14.7 billion) merger of Johnson Controls, a US maker of car batteries, and Cork-based Tyco International as “a perversion”.

Donald Trump, the businessman leading the Republican presidential race, regularly name-checks Ireland in his campaign speeches, complaining that Pfizer is moving to Ireland because US taxes are “too high”.

In 2014, Mr Obama singled out Ireland, criticising US companies for “magically” becoming Irish through these mergers.

1 Ryanair and Aer Lingus monitor impact of conronavirus on travel to Italy
2 Bank leaked my loan request to family who tried to rip me off
3 Mastercard to create 1,200 new jobs by expanding base in Dublin
4 Boris Johnson's new immigration regime will damage much more than industry
5 Billionaire Zara founder and German funds vie for prime Dublin offices
6 A maverick taking on the Irish whiskey establishment
7 How can I view my dead brother’s will if I’m not the executor?
8 Your business week: Election-hit Bank of Ireland to report results
9 Garda mobile contract win causes concern over Eir’s use of Huawei kit
10 Google completes purchase of Treasury Building for €120m
Real news has value SUBSCRIBE