Pandemic exacerbated issues VW had with launch of its battery-powered ID.3 hatchback 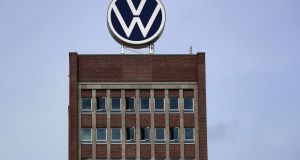 The shortfall of about 0.5 gram of carbon dioxide emitted per kilometre driven may lead to a fine of more than €100 million for Volkswagen. Photograph: Krisztian Bocsi/Bloomberg

Volkswagen narrowly missed complying with stricter emissions standards set by the European Union last year, a disappointment for the company plotting the most ambitious push into electric vehicles among legacy carmakers.

The shortfall of about 0.5 gram of carbon dioxide emitted per kilometre driven may lead to a fine of more than €100 million, an amount that won’t affect VW’s earnings because the company had already provisioned for possibly missing its target.

Disruptions related to the Covid-19 pandemic exacerbated issues VW had launching its battery-powered ID.3 hatchback, which went on sale much later than expected largely due to software problems. While the company managed to sell more fully electric cars than any other automaker in Europe last year, claiming roughly 25 per cent market share, those deliveries weren’t enough to offset emissions from the rest of its fleet.

Expanding electric-car offerings across the group’s stable of brands “will allow us to achieve our fleet target this year”, VW chief executive Herbert Diess said in a statement.

The German industrial giant has little time to waste getting its electric-car push off the ground as Tesla Inc plans to open a gigafactory on its home turf later this year. VW’s German rival Daimler AG managed to meet CO2 standards in Europe thanks to a surge in plug-in hybrid sales toward the end of last year.

The main VW marque will introduce the ID.4 electric SUV in the coming months and the Audi and Porsche luxury brands will add more variants for their e-tron and Taycan models. Other mass-market electric cars that are poised to hit showrooms include the Cupra El-Born and the Skoda Enyaq.