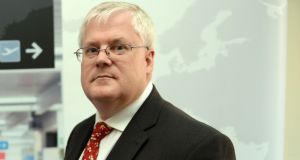 The State-owned company, which operates Cork and Dublin airports and a number of duty-free shops overseas, confirmed on Wednesday that it intends to begin searching for a successor and will make an announcement in due course.

Mr Gray will remain with DAA until the company has appointed his successor, to ensure an easy transition.

Dalton Philips, DAA chief executive, said Mr Gray had made an outstanding contribution to the company.

“Ray has held the position of group chief financial officer since 1999 and has been at the heart of the business throughout his tenure,” he said.