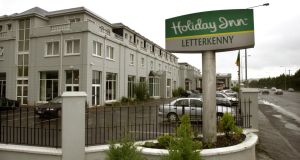 About 650 jobs are being axed worldwide at Holiday Inn and Crowne Plaza owner Intercontinental Hotels Group after it revealed half-year losses following a “substantial” hit from the coronavirus crisis.

The group confirmed it is cutting about 10 per cent of its corporate-level workforce across global operations, but did not provide a regional breakdown.

The cuts, which were announced internally in July, come after a raft of job loss announcements by rivals across the sector.

Details of the plans at Intercontinental Hotels Group came as results showed it slumping to a pretax loss of $275 million for the six months to June 30th compared with pretax profits of $375 million a year earlier.

IHG chief executive Keith Barr said: “The impact of this crisis on our industry cannot be underestimated, but we are seeing some very early signs of improvement as restrictions ease and traveller confidence returns.”

Intercontinental – which employs about 40,000 staff around the world – said it would not pay out an interim shareholder dividend due to the limited visibility of the pace and scale of market recovery.

The group still had 317 hotels, or 5 per cent of its global estate, closed at the end of July.

Adama Traoré is everything City hate - can they stop him this time?