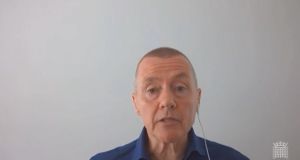 Unions plan to question Aer Lingus further on the airline’s plans to seek what some speculate could be as many as 900 job cuts as it grapples with the Covid-19 crisis.

Representatives of Fórsa, Siptu, Unite and Connect, the unions that represent most of the Irish carrier’s workers, held talks with management on Tuesday following earlier discussions where the company said it would have to cut its 4,500-strong workforce.

Unions intend to put a series of questions to Aer Lingus after the company gave their representatives a presentation on Tuesday but did not give details on the number of redundancies it was likely to seek.

The airline has already said that it expects its business next year to be about 20 per cent smaller than in 2019, so would seek to reduce employee numbers in line with this. That led to speculation that Aer Lingus wants about 900 redundancies.

Unions also sought commitments from the airline, which has cut operations by more than 90 per cent, on staff pay.

The coronavirus pandemic has forced Aer Lingus to halve wages across the board. The company is also relying on Government supports to pay workers.

In a statement, Aer Lingus said it was “continuing to engage with the relevant representative bodies and communicate directly with our employees”.

British Airways, part of International Consolidated Airlines’ Group (IAG) along with Aer Lingus and Spanish carriers Iberia and Vueling, is in talks with its unions about plans to cut 12,000 jobs.

Willie Walsh, IAG’s chief executive, confirmed last week that Aer Lingus would have to be restructured along with the rest of the group’s carriers.

Mr Walsh has warned British politicians that the group was fighting for its life in the face of travel restrictions that have grounded passenger flights in Europe and elsewhere.

“It’s a very severe and very significant crisis,” he told the British parliament’s transport committee this week. “Quite honestly, the likelihood of any improvement in the short term is zero.”

He predicted that an announcement by British prime minister Boris Johnson of a 14-day quarantine for travellers entering the UK would exacerbate the situation and prompt IAG to rethink plans to restart flying in July.