How will Ryanair’s plans to restore flights work?

Q&A: How will social distancing be maintained? 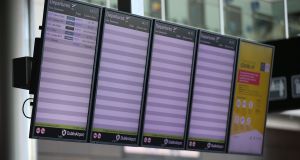 Passengers may be required to have their temperatures checked at airports. Photograph: Nick Bradshaw

What services will be restored?

Ryanair hopes to resume flights on 139 routes from the Republic’s airports, 101 from Dublin, 23 from Cork and 15 from Shannon. These will be the usual services operated from the State, but the airline will fly them less frequently, particularly longer routes.

Why is the airline announcing this now?

Ryanair believes July will be time to resume flying as EU countries begin to gradually ease lockdowns. Willie Walsh, chief executive of the company that owns Aer Lingus and British Airways, said on Monday he believed it would take several years for passenger demand to return.

How will this work with precautions such as social distancing still in place?

Ryanair says that passengers should have their temperatures checked, wear face masks, carry less check-in baggage and download boarding passes to smart phones instead of printing them.

What about on board?

Crew will wear face masks and gloves. They will sell only pre-packed snacks, toilets will only be opened on request to eliminate queues. Planes have advanced air filtration systems that operate to the same standard as those in hospital intensive care wards.

Who will carry out temperature checks and be responsible for other precautions?

Ryanair believes that airports should carry out temperature checks as passengers enter them and require people to wear face masks.

Has all this been worked out?

Airports have not agreed to this yet. Airlines are responsible for checking in and boarding passengers and their luggage but not the journey through the airport. Governments determine Covid-19 travel restrictions, so there will have to be a co-ordinated approach.

Are some governments not imposing quarantines, while others have different restrictions?

British prime minister Boris Johnson says the UK will quarantine those arriving into its jurisdictions for 14 days, but that will not apply to travellers from the Republic. The Government has said all travellers arriving in the Republic, incuding from Britain, will be asked to quarantine for two weeks.

Spain is introducing a 14-day quarantine for anyone arriving between now and May 28th, when its state of emergency ends. However, many expect that deadline to be extended.

Meanwhile, Baltic states, Latvia, Lithuania and Estonia, have lifted travel bans between those three states and plan to ease restrictions on those from other regions quickly.

Where does the EU stand on this?

Eddie Wilson, chief executive of Ryanair Designated Activity Company, says that the European Commission is working hard in the background to begin restoring travel, particularly as it recognises the importance of tourism to many member states, particularly in southern Europe.

What about customers waiting on refunds for cancelled flights?

Mr Wilson says that the airline is still working through a “colossal” number of refunds to passengers whose flights have been cancelled and notes that the number of staff working on this has been depleted.