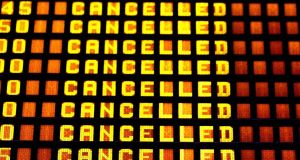 Staff at the Irish Aviation Authority (IAA) are to deliver €2 million in savings over the next four months as the agency deals with a “collapse” in its revenues due to Covid-19.

Unions for the IAA’s 700 staff, Fórsa and the Association of Higher Civil and Public Servants (AHCPS), reached a deal with the authority whereby staff earning over €38,500 will revert to a 4½-day working week and a voluntary scheme introducing special leave arrangements.

Arising from the deal, union representatives acknowledged that some staff may be called upon to work normal hours during the period of the temporary agreement due to the demands of business and infrastructural needs. They said the shortened working week and special leave arrangements are temporary and that there will be triggers and dates to return full hours to staff.

A briefing note to staff said the cost containment measures are in place due to the “collapse” in the company’s revenues. The two sides entered talks against the background of air traffic decreasing by more than 80 per cent since March due to Covid-19.

The bulk of the authority’s revenues of €197 million last year were made up of €129 million in “en route” aviation-related services.

Staff pay for April and May was protected as the IAA used cash reserves to maintain liquidity. At the end of last year, the IAA’s cash pile stood at €20.1 million.