Germany declines to comment on possible talks with Lufthansa investor 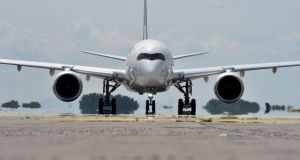 A Lufthansa Airbus A350. With the German airline already retiring about half of its 14 Airbus A380s, remaining aircraft will be relegated to its secondary hub in Munich.

The German government on Friday declined to comment on possible talks with Lufthansa shareholder Heinz Hermann Thiele after a newspaper reported the billionaire has reached out to Berlin in a standoff over a $10 billion rescue package. A spokesman for the economy ministry said: “We can neither confirm, deny nor comment on any talks.”

It comes amid news that the German airline’s fleet of Airbus SE A380 jets will be mothballed for at least two years and may never return to service as demand for long-haul travel remains subdued in the wake of the coronavirus outbreak. With Lufthansa already retiring about half of its 14 superjumbos, remaining aircraft will be relegated to its secondary hub in Munich.

Flights could resume there in 2022 if there’s enough demand on “thick” routes such as New York and Chicago, said Klaus Froese, who runs the carrier’s main Frankfurt base.

“In Frankfurt, the chance that we will again operate any A380 is close to zero. That’s all but decided,” he said. “In Munich we will have to see. Planning is very difficult in these times.”

The Covid-19 pandemic is hastening the demise of the A380 as a front-line aircraft, with Air France phasing out the jet and Dubai-based Emirates, the largest operator, said to be mulling plans that could see 65 retired.

Lufthansa grounded the double-decker in March with the rest of its passenger fleet as the virus spread, and has said seven aircraft will be permanently withdrawn. Froese said that while the current plan is for the remaining A380s to make a comeback, that will only happen if they have a role to play, and that what was once a marquee model has lost its allure, especially since Airbus decided to call a halt to the programme after orders dried up.

“This is no longer a question of prestige, that’s a thing of the past,” he said. “It changed pretty quickly since the decision to no longer build the aircraft.”

Brussels Airlines, which employs 4,200 people, said last month it would cut its fleet of aircraft by 30 per cent and its workforce by a quarter to ensure its survival during and after the coronavirus crisis.

Talks to save the Belgian airline been have stalled for weeks but directors of Lufthansa, which has itself been bailed out by the German government, and Brussels Airlines would meet on Monday to discuss a plan for its future.

Belgium’s government said last month it was committed to reaching a €300 million deal with Lufthansa to save Brussels Airlines if its future was guaranteed. – Reuters/Bloomberg