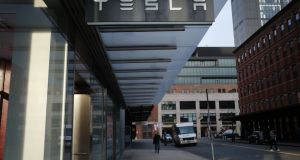 Investors that buy up short positions profit when a stock falls in value and have piled into bets against Tesla over the years. Photograph: Spencer Platt/Getty Images

Investors betting against Tesla suffered record losses of $5.8 billion (€5.2 billion) in January after the stock hit a new high, marking a win for chief executive Elon Musk in a long-running battle with short-sellers.

Investors that buy up short positions profit when a stock falls in value and have piled into bets against Tesla over the years. In January, the value of those positions plummeted after the company’s shares surged 55 per cent for the month.

The share price increase was boosted by fourth-quarter earnings on Wednesday when Tesla posted a $105 million profit. The share price gain was the highest since May 2013 when the group posted its first profit.

“This has been quite the run,” said Ihor Dusaniwsky, managing director for predictive analytics for S3 Partners. Many short-sellers will probably hold their positions hoping the stock will drop or slowly exit over time, he said. “It’s going to take a while for this to shake out.”

Mr Musk’s testy sparring online with notable short-sellers, including David Einhorn of Greenlight Capital, has become one of the fiercest rivalries in capital markets.

Greenlight Capital is a long-time detractor of the carmaker and in its annual letter to shareholders in January revealed that it holds a put option against Tesla. This type of option gains in value if the stock drops, but suffers muted losses compared with a typical short position if the share price rises.

Mark Spiegel, managing member of Stanphyl Capital, will maintain a short bet against Tesla despite the bumper run for the stock but has capped the position to 5 per cent of the portfolio. He points to lower revenue and profit for the second half of 2019 compared with the same period a year earlier as a signal the company’s outlook was weaker than it appeared.

“The only things growing at this alleged hypergrowth company are increasingly profitless unit deliveries and the stock price,” Mr Spiegel said. Greater competition from established automakers in the electric vehicle segment would also pressure Tesla’s stock price in the future, he added.

Toby Clothier, an analyst at Mirabaud Securities, said the $105 million fourth-quarter net profit should be considered a net loss in part because 7,000 cars sold in the quarter were made in the prior quarter, skewing the numbers. The company has also predicted a week-long delay to production from its Shanghai factory because of the coronavirus outbreak.

“If you look at the numbers closely there are things that are confusing,” Mr Clothier said. “Tesla makes no money whatsoever and has quite high capital intensity.”

Tesla did not immediately respond to a request for comment. – Copyright The Financial Times Limited 2020

1 ‘No demand... because there are no people’ at well-known Dublin pub
2 HSE says fix for Covid Tracker app rolled out to all Android users
3 Buying a second home now that we work from home
4 Nearly 30,000 could lose pandemic payment if they do not confirm eligibility
5 Bank of Ireland does U-turn after refusal to reimburse ‘smishing’ victims
6 Face masks developed in Ireland could help meat-plant workers
7 F1 revenues almost wiped out by pandemic halt to races
8 Shelbourne Hotel operator Marriott posts bigger-than-expected loss
9 Science of selling crucial to post-Covid recovery
10 MSD buys Takeda biologics plant in Dunboyne
Real news has value SUBSCRIBE