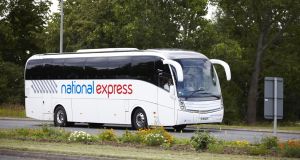 National Express, the Birmingham-based public transport operator, has won a contract to run an airport coach service in the Republic.

The largest coach operator in Britain has secured a deal to run a high-frequency, cross-city network service, which will be operated on its behalf by Bernard Kavanagh Coaches.

The service will provide three routes up to 24 hours a day to and from Dublin city centre and Dublin airport. Additional services will be added over time, the company said.

Dublin Express will transform what it means to ride an airport service in the Irish capital,” said John Boughton, managing director of National Express Ireland.

“We currently run 1,100 airport services every day on a 24 hour basis direct to the terminal for all major UK airports including Gatwick, Luton, Stansted, Heathrow and Manchester. And as Ireland’s largest private coach operator, we have previously worked with Bernard Kavanagh Coaches to operate Irish services,” he added.