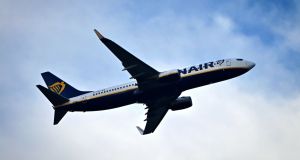 Ryanair shares took off on Monday despite the airline conceding that it faced further delays in the delivery of new aircraft that it was due to receive before the summer.

The Irish carrier said profits in the three months to December 31st hit €88 million, turning around a €66 million loss during the same period in 2018.

The airline confirmed that the new Boeing 737 Max aircraft will not be in service for its summer schedule and that deliveries of the craft won’t be until September or October this year.

Ryanair originally expected to have the first 20 of the 210 Max’s that it intends buying by the end of March.

Aviation safety regulators grounded the Max in 2019, ordering Boeing to resolve a software failure blamed for causing two of the new craft, owned by African and Far Eastern carriers, to crash with the loss of more than 300 lives.

Delays in getting the Max approved and delivered forced Ryanair to cut growth plans last year.

The airline said that it closed several loss-making winter bases and laid off staff in Spain, Germany and Sweden, but maintained that it kept job losses to a minimum.

At the beginning of January, Ryanair group chief executive Michael O’Leary flagged the likelihood that it would not receive the new Boeing ’plane until October.

Ryanair said the delay in the delivery of the Max will push back its goal of carrying 200 million passengers annually by one or two years to 2025 or 2026.

The problem is also pushing up maintenance costs as the carrier is keeping older craft in its fleet for longer than originally planned.

Ryanair flew 35.9 million passengers during the three months to December 31st, the third quarter of its financial year, 6 per cent more than during the same period in 2018.

The airline said that it would carry fly 154 million passengers in this financial year, which ends on March 31st.

Ryanair’s statement indicated that it expected to make around €1 billion profit in the current financial year.

“This guidance is heavily dependent on close-in fourth quarter fares and the absence of any security events,” it added.

The airline’s fuel bill rose by €83 million or 14 per cent to €700 million as prices increased and passenger traffic grew. It expects fuel to cost €440 million extra over the 12 months to March 31st.

Ryanair has returned €440 million to investors through a €700 million share buy-back programme. Its net debt was just over €700 million on December 31st.

Group airlines Buzz in Poland and Malta Air in Malta grew. Buzz will have 50 craft by March 31 and has opened new bases at Prague in the Czech Republic and Budapest in Hungary.

Malta Air will have 120 craft at the end of the current financial year and has taken over the group’s French, German and Italian bases.

Austrian subsidiary Lauda’s fares were lower than expected, despite growing passenger numbers, as battled price competition from Lufthansa. The Vienna-based airline will grow its fleet to 38 craft from 23 this year.

1 Belgium helps Ireland to a Brexit boon
2 ‘My rent here is so low it’s a joke’
3 ‘Sad day’ for House of Ireland as tourism retailer goes out of business
4 This charming man: how Paschal Donohoe won the Eurogroup presidency
5 AIB to compensate another 1,100 tracker mortgage holders
6 Can Grafton Street stop the flood of closures?
7 New Powerscourt Springs hotel to open in defiance of virus gloom
8 Goodbody’s planned €155m sale to Bank of China falls through
9 FC Barcelona to pursue Nike for compensation over defective shirts
10 Ryanair accuses ‘screen scrapers’ of blocking refunds
Real news has value SUBSCRIBE