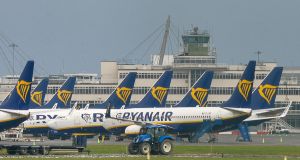 Ryanair’s call on the Government and the EU to speed up vaccinations to get the Republic and the bloc out of the Covid-19 crisis looks optimistic. The UK has inoculated more than one in 10 of its 60 million people so far, but the comparable figures are just one in 30 here and 2 per cent throughout Europe.

That’s a dismal performance, one that cannot be covered up by the EU’s row with AstraZeneca.

As things stand, business in the EU and Republic look set for further sustained disruption. Both now risk another year without substantial tourism, an activity that wholly or partly supports tens of thousands of hospitality jobs here.

Many of those people are among the 480,000 getting the pandemic unemployment payment while they sit out another lockdown. No one would blame anyone in this situation for fearing their jobs may not return this year, if at all.

Ryanair may not want to, but it can ride out out this storm. It has €3.5 billion in cash, has cut costs by two-thirds and will ultimately be plying its trade in a market where rivals have folded or severely cut back while it buys 210 new planes.

It may not be possible to say the same for many locked-down businesses on the ground in the Republic. In December, the Economic and Social Research Institute predicted that up to 240,000 people could still be looking for a job by Christmas 2021.

The ESRI predicted this before new Covid variants and accompanying restrictions dealt a blow to hopes of an early recovery, so there could be far more than a quarter of a million families without a breadwinner at the end of the year.

Allowing the crisis to drag risks causing more long-term damage to businesses and the livelihoods they support. Ryanair is correct, the only real way out is a speedy vaccination programme. The problem is that neither the Government nor the EU seem to share its sense of urgency.