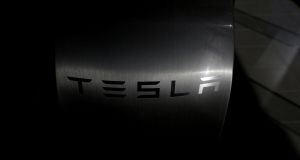 Tesla said on Monday it would raise about $1.5 billion (€1.27 billion) through its first-ever offering of junk bonds as the US luxury electric car maker seeks fresh sources of cash to ramp up production of its new Model 3 saloon.

The move to issue junk bonds - lower-quality investments that offer higher yields - represents a bet by Tesla chief executive Elon Musk that bond investors will be as hungry as stock investors to back the company on expectations that its Model 3 will be a hit.

Tesla shares are up 67 per cent this year, pushing the company’s market value to about $60 billion, above that of top US automakers General Motors and Ford Motor, even though Tesla has yet to make an annual profit.

So far, Tesla has been raising money to pay its bills with a combination of equity offerings and convertible bonds, which eventually convert into shares. In March, the company raised $1.4 billion through a convertible debt offering.

Following the announcement, Standard & Poor’s reaffirmed its negative outlook for the automaker and assigned a “B-“ rating for the bond issue - deep into junk credit territory. S&P also maintained its “B-“ long-term corporate credit rating on Tesla.

“We could lower our ratings on Tesla if execution issues related to the Model 3 launch later this year or the ongoing expansion of its Models S and X production lead to significant cost overruns,” S&P said in a statement on the bonds.

Moody’s assigned a junk “B3” rating to the bond issue and said the company’s rating outlook was stable.

The rating agency said the overall company’s “B2” rating was supported by the fact that if Tesla ends up in serious financial trouble, its brand name, products and physical assets would be of “considerable value” to other automakers.

“There is a risk they could still run out of money,” he said. “Then you’d go back to the equity markets and hope it’s not too late” to raise more money.

The latest effective yield on single-B rated bonds maturing in seven to eight years, the class for a Tesla issue, is around 5.5 per cent, according to Bank of America Merrill Lynch Fixed Income Index data.

Tesla’s bond will price later this week after several days of meetings with credit investors, who will weigh factors including the absence of a borrowing history, its lack of profit and its high cash-burn rate against its growth potential and its attractiveness as an environmentally friendly green issuer.

Ultimately, the depth of investor interest will determine the bond’s interest rate.

Tesla is counting on the Model 3, its least pricey car, to become a profitable, high-volume manufacturer of electric cars.

Tesla said last week that it had 455,000 net pre-orders for the Model 3, which has a $35,000 base price, and that the saloon was averaging 1,800 reservations per day since it launched late last month.

At the launch, Musk, however, warned that Tesla would face months of “manufacturing hell” as it increases production of the saloon.

Tesla had over $3 billion in cash on hand at the end of the June quarter, compared with $4 billion on March 31st.

The company has said it expects capital expenditures of $2 billion in the second half of this year to boost production at its Fremont, California assembly plant and a battery plant in Reno, Nevada.

BOI customers to be charged twice with bank fees on New Year’s Eve 16:48
Taoiseach concerned at ‘complacency’ of some firms over Brexit preparation 15:46
Covid-19 will worsen housing affordability, report warns 15:30
Irish boss of Qantas says Covid vaccines will be mandatory 14:36
Aminex has roadmap to obtain gas from Tanzania project 14:11

1 BOI customers to be charged twice with bank fees on New Year’s Eve
2 Irish designer of Oxford vaccine : ‘I’ve never worked so hard in my life’
3 Covid-19 will worsen housing affordability, report warns
4 Irish boss of Qantas says Covid vaccines will be mandatory
5 Chris Johns: I think we are on the cusp of an economic boom
6 Being polite in work emails is more important than ever
7 Oxford Covid-19 vaccine can be 90% effective, results show
8 Goldman Sachs advises NatWest on Ulster Bank review
9 EU transport companies fear chaos through Britain on January 1st
10 Microsoft to create 200 jobs at new €27m engineering hub in Dublin
Real news has value SUBSCRIBE