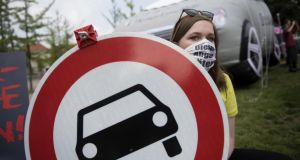 Activists protest in front of federal ministry of transport in Berlin prior to the diesel conference. Photograph: Steffi Loos/Getty Images

Software fixes to lower harmful emissions from diesel car engines are likely to contravene European Union law, according to an Irish lawyer involved in the ongoing VW emissions scandal. He says the only legal solution currently available is to ban the affected cars from the roads.

Germany’s big three car companies – VW Group, Daimler and BMW – on Wednesday announced they were rolling out software update on millions of diesel cars as they struggle to counter growing public concerns over nitrogen oxide (NOx) emissions from diesel engines.

Citing the 2007 EU directive relating to emissions, Mr O’Dwyer said: “There was never any lawful basis for the fix in the first place.”

“The EU has banned software cheating defeat devices. There is no EU law authorising any fix to cure the existence of defeat devices. Unless the EU amends the law, the only legal solution currently available is to withdraw those cars affected from the roads including here in Ireland.

“In this case the political and legal solutions are, as of now, utterly incompatible,” according to Mr O’Dwyer.

Joining in the widespread dismissal of Wednesday’s “diesel summit” in Berlin, he said: “The belated meeting of the German federal government and domestic car manufacturers seeking to find a German solution to a German problem. This is a pan-European problem that is incapable of being fixed in one EU member state.”

An estimated 110,000 diesel cars in Ireland are affected in the VW Group emissions issue, across its Audi, Skoda, Seat and Volkswagen brands.

Representatives of Mercedes-Benz Ireland and VW Group Ireland said they had no details yet on the implications of Wednesday’s announcement for Irish buyers.

BMW is describing its software update as an improvement rather than a fix, saying it is “the result experience gained through actual on-road driving between 2010 and 2015”. A spokeswoman for the car firm’s Irish operation said: “At present we are looking into yesterday’s announcement to see what the implications are from an Irish perspective.”

BMW chief executive Harald Kruger also announced plans to offer the owners of older BMW diesels €2,000 incentive to change to a newer model. The BMW Ireland spokeswoman could not confirm whether the offer will be made to motorists here.

Meanwhile the mayor of Munich, home to carmaker BMW, expressed doubts about whether Wednesday’s announcement by German politicians and auto makers was enough to avert possible bans of diesel vehicles.

“I fear that the promised software updates for newer cars and financial support for the owners of old cars will not be enough to protect the health of people in the cities,” said Munich mayor Dieter Reiter.

One of the world’s leading parts suppliers, Continental, said German carmakers are likely to stop developing new combustion engines in as little as six years as they focus investments in electric cars and self-driving technology.

According to its chief financial officer, Wolfgang Schaefer: “A new generation of combustion engines will again be developed but after that (around 2023), a further development will no longer be economically justifiable because more and more work will switch into electric mobility.”