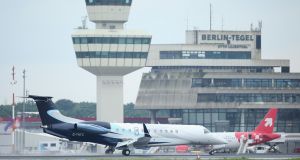 The Irish low-cost airline, never afraid of cost-effective publicity, has sponsored 100 posters for the opposition Free Democratic Party (FDP) in its referendum campaign to keep the western city airport open.

Mr Müller, who insists Tegel must close, said he is “amazed” that Ryanair has intervened ahead of the September 24th vote in the city.

“They are not concerned about the city or the airport, simply greedy for profits,” said the mayor to Berlin’s Tagesspiegel daily.

Retaining Tegel would bring security and health risks, a €1 billion bill to renovate and untold millions in compensation from residents who have waited 20 years for its closure, Berlin’s city government says.

They also point to the court order for all other airports in Berlin to close six months after the new facility, BER, opens. The problem for Mr Müller’s government: five years and twice over budget at €5.4 billion and counting, no one knows when the new airport will open.

With 33 million passengers annually served by Tegel and Schönefeld airports, the promised new facility is already too small to cater for visitor numbers before it opens.

For Mr Jacobs, it is madness to have just one airport for a city with 3.5 million people – 6 million if you include the surrounding state of Brandenburg.

“The airport of my home town, Dublin, already has a greater capacity than BER – 35 million – although just one million people live in the greater Dublin area,” he told the Berliner Zeitung daily. “Even if it sounds crazy, I think Berlin would need a third airport.”

That prompted an angry riposte from Mr Müller, already fighting an uphill referendum battle given emotional attachment to Tegel and frustration over BER that costs a reported €1 million a day just to keep closed.

For Mr Müller, Ryanair is the villain of the piece, with an “aggressive, unsustainable business model” that is only interested in “its own economic benefit”.

“Ryanair aren’t interested in a third airport … they just want more profits for them in Ireland,” he said. “They’re not interested in the common good.”

8 GAA gets go-ahead for new hotel near Croke Park