Staff at State-owned DAA will have no bonuses or pay increases this year, and recruitment has been frozen 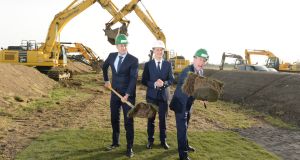 Dublin and Cork airports owner DAA paid staff a profit share and other bonuses due for 2019 last week, the State-owned company confirmed on Monday.

Activity in all Irish airports has come close to shutting down as airlines grounded flights after most countries imposed tough travel restrictions aimed at halting the spread of Covid-19.

DAA confirmed yesterday that it had paid staff “profit share, gainshare and performance-related” payments due for 2019.

The company did not give a figure for the total paid to workers, but said they included a €500 voucher given to almost all staff. It employs more than 3,300 people in the Republic.

“These payments were triggered after a range of specific financial targets were met for last year,” a spokesman said.

“In several years in the past, the payments for the previous year would have already been made by early April.”

The spokesman added that DAA told workers last month that there would be no payment of profit share or other bonuses for 2020. “There will be no pay increases this year and all recruitment has also been frozen,” he stressed.

DAA’s spokesman also noted that under the terms of his contract, chief executive Dalton Philips, did not qualify for any performance-related pay, profit share or gainshare payments.

Aer Lingus and Ryanair, DAA’s biggest airline customers, have grounded almost all flights and expect this situation to last until at least the end of May. Most other carriers operating from the Republic have ceased flying while restrictions last.

Airports, including the Republic’s main gateway Dublin, remain open and continue to handle cargo flights and other vital services.

However, by the end of last month passenger numbers at Dublin Airport had fallen 90 per cent.

DAA curtailed operations as passenger services fell dramatically through March as coronavirus spread through Europe and the US.

The company confirmed that it would continue to pay staff their full salaries for the next month when it announced the move in mid-March. However, staff do have to take seven days worth of leave during that period.

DAA said that factors such as Government travel policies in relation to Covid-19, airline operations, and the approach of airports in the main overseas markets served by flights from the Republic, would determine its future level of operations.

DAA is due to publish its annual report and financial results for 2019, which will detail its performance last year, in the coming weeks.

The State company said in January that Dublin Airport handled a record 32.9 million passengers last year. The total was a 4 per cent increase on 2018.

Aston Martin chief to leave as part of shake-up 17:42
Ryanair goes to court over conduct of social welfare appeal 17:29
Office chitchat is essential for the free flow of ideas 17:03
More than 1,000 pubs have an interest in FBD ‘test case’, court told 16:45
Volkswagen agrees to compensate tens of thousands of German motorists 15:20

1 More than 1,000 pubs have an interest in FBD ‘test case’, court told
2 Schrems calls on EU authorities to intervene in ‘Kafkaesque’ DPC case
3 Ryanair goes to court over conduct of social welfare appeal
4 Player Wills site: Hines and APG to seek permission for 416 homes
5 Eir sells mobile mast infrastructure company for €300m
6 Pricewatch: Coronavirus has given us four categories of shopper
7 Will remote working mean an end for the corporate HQ?
8 Economies can be restarted if bold and imaginative choices are made
9 A Smigin of language goes a long way for well-travelled Cork woman
10 Volkswagen agrees to compensate tens of thousands of German motorists
Real news has value SUBSCRIBE