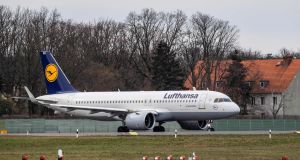 Lufthansa said that members of its executive board had waived 20 per cent of their compensation “in solidarity with all employee groups”. Photograph: AFP

Two-thirds of Lufthansa’s global staff will work reduced hours after the German airline grounded much of its fleet due to the coronavirus pandemic, Lufthansa said on Wednesday.

Lufthansa has applied or will apply for state aid to keep about 87,000 staff working on shorter hours, a spokesman said. The move was first reported by Business Insider.

On Monday, Lufthansa said it had reached agreements with its works council and trade unions to introduce short-time working for at least 27,000 cabin and ground staff in Frankfurt and Munich.

It had also said that members of the executive board had waived 20 per cent of their compensation “in solidarity with all employee groups”.

The equivalent of 700 of Lufthansa’s fleet of 763 aircraft are currently grounded, the spokesman added. – Reuters

1 We are ‘sale agreed’, but can we go back with a lower offer?
2 Working from home: New costs, new stresses and little relief
3 Ryanair almost certain to oppose German government’s bailout of Lufthansa
4 Eason to lay off 150 staff as it prepares for June reopening
5 HSBC board rethinks overhaul and seeks even deeper cuts
6 Restaurants and gastropubs hope to avoid a dry reopening
7 Joint accounts: if one of us dies, can the other access the money?
8 Ryanair to challenge Lufthansa’s €9bn aid
9 ESB shelves plan for €500m electricity generator at Poolbeg
10 Hot-desking continues at bank call centres, workers say
Real news has value SUBSCRIBE