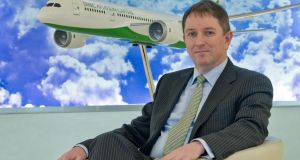 Airlines face a tougher environment than in recent years, when they benefitted from strong demand and cheap fuel, according to Peter Barrett, chief executive of Dublin-based aircraft lessor SMBC Aviation Capital.

Carriers such as Norwegian (which is licensed in the Republic), Flybe, Germania – which had to raise €15 million to keep flying – and Wow all recently reported financial problems stemming from increased competition and costs.

Speaking after SMBC announced it was buying 65 aircraft worth about €6.5 billion from Airbus, Mr Barrett said the “planets aligned for airlines” in recent years when strong demand, low interest rates and cheap fuel drove expansion.

“It’s definitely a much tougher environment now,” he said, acknowledging that competition combined with rising interest rates and fuel prices were putting many airlines under pressure.

SMBC buys aircraft and leases them to about 100 airlines in 50 countries. The Dublin-headquartered company earned $168 million (€148 million) profit in the six months ended September 30th.

Its chief executive argued that while challenges would remain in the market, good airlines with clear strategies would survive.

“We are seeing a much tougher credit environment for customers, but we have not seen that flow directly through to demand yet,” he added. “It’s competitive, but we’re making money and putting the airplanes away.”

SMBC is experiencing demand from airlines seeking to replace their fleets and from carriers in Asia and central and south America, where it has done deals with AeroMexico and Colombia’s Avianca, among others.

Mr Barrett will be attending the Airline Economics and Airfinance Dublin conferences this week. Both are being hosted here and have drawn delegates from all over the world, and will feature speakers from airlines such as US carriers Delta and Southwest.