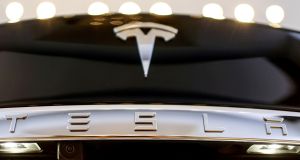 Tesla chief executive Elon Musk tweeted on Monday that he was working with buyout firm Silver Lake and investment bank Goldman Sachs as financial advisers on his plan to take the US electric car maker private.

The announcement represents the latest effort by Musk to add credibility to his proposed $72 billion deal for Tesla, following his tweet last week that funding for it was “secured”. That earlier tweet has triggered investor lawsuits as well as an investigation by the US Securities and Exchange Commission into the accuracy of his statement.

Musk also posted in a blog post on Monday his most detailed vision yet into how a Tesla take-private deal could work, but shares in the car maker ended flat, indicating investor scepticism over its feasibility.

A source familiar with the matter said Silver Lake was offering its assistance to Musk in his exploration of a deal without compensation, and had not been hired as a financial adviser in an official capacity. The firm is known for putting together leveraged buyouts in the technology sector rather than providing investment banking advice.

Moreover, Silver Lake, which contributed $1.4 billion in equity to Michael Dell’s deal in 2013 to take the eponymous US computer maker private, is not currently discussing participating in the potential Tesla deal as an investor, the source added. Silver Lake and Goldman Sachs declined to comment.

Musk also said law firms Wachtell, Lipton, Rosen & Katz and Munger, Tolles & Olson would be legal advisers on the plan. Both law firms did not immediately respond to requests for comment.

Musk shocked markets last week with the tweeted announcement that he was considering taking Tesla private for $420 a share. Tesla shares ended trading on Monday at $356.41.

Musk said earlier on Monday that the manager of Saudi Arabia’s sovereign wealth fund had voiced support for the company going private several times, including as recently as two weeks ago, but also said that talks continue with the fund and other investors.

“I left the July 31st meeting (with the Saudi fund) with no question that a deal with the Saudi sovereign fund could be closed, and that it was just a matter of getting the process moving,” Musk said.

“This is why I referred to ‘funding secured’ in the August 7th announcement.”

The Saudi fund over nearly two years had approached him repeatedly about taking the company private, Musk said, and the latest meeting came after it took a nearly 5 per cent stake in Tesla.

Saudi Arabia’s Public Investment Fund (PIF) manages more than $230 billion in assets, but about 65 per cent of that is stakes in large Saudi companies and most of the rest has been committed in overseas deals such as funding commitments to Blackstone Group LP’s US. infrastructure fund or SoftBank Group Corp’s Vision Fund.

The Saudi fund intends to sell its $70 billion stake in Saudi Basic Industries to oil giant Aramco, which could free up funds for new deals, but that sale may take months to conclude.

Yasir Othman al-Rumayyan, managing director of the PIF, referred Reuters to the corporate communications team, which did not immediately respond to a request for comment.

Musk said that since his Twitter post on the possibility of a deal the managing director of the Saudi fund had expressed support for proceeding, subject to financial and other due diligence.

PIF officials have said in the past that decisions at the sovereign wealth fund are made with care, emphasizing corporate governance. The PIF board is headed by the Crown Prince Mohammed bin Salman.

Securities lawyers said US law requires executives and companies to have a “reasonable basis” on which to make statements, meaning the fact Musk said he believed he had secured a verbal agreement for the funding after the July 31st meeting could put him on a firmer footing with the SEC.

It remains unclear if his definition of “secured” matches those of a reasonable shareholder, who may believe the statement indicated Musk had a written agreement, they said.

“This supports the idea that there was reasonable basis on which to believe that funding could be secured but it doesn’t eliminate the concern with respect to whether ‘secured’ was an overstatement and only underscores how inappropriate Twitter was for such a disclosure,” said Zachary Fallon, a former SEC attorney and principal at law firm Blakemore Fallon.

Musk on Monday estimated two-thirds of existing Tesla shareholders would roll over their holdings into a private company, but said that he was still talking with major shareholders and advisers before settling on a structure for the deal.

He added that most capital for the deal would come from equity and it would not be “wise” to burden the company with added debt. Discussing full details on the plan, including the source and nature of the funding, would be “premature” now, he said.

A major investment from Saudi Arabia would likely trigger a review by the Committee on Foreign Investment in the United States, which scrutinizes deals for potential national security concerns.

Jeremy Zucker, co-head of Dechert’s International Trade practice, said two key determinations would be made if a deal moved forward: whether Tesla contained critical technologies and whether the involvement of Saudi financing was a national security issue. – Reuters