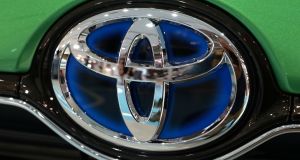 Toyota was the most popular new car brand in July, according to CSO data

The number of new cars taking to our roads is down 4.5 per cent this year, while used car imports are up 11.3 per cent, according to figures from the Central Statistics Office.

The slump in new car sales contrasts with the growth in used car imports taxed for the first time, which are up 11.3 per cent so far this year, at 58,474. The majority of these cars are between three and five years old

The CSO figures differ from those provided earlier in the month by the Society of the Irish Motor Industry (SIMI) in that they record vehicles taxed for the first time, while the SIMI figures record new registrations.

Total new car registrations came to 114, 029 to the end of July, according to the SIMI. The discrepancy of 10,249 - or 9 per cent of registrations - is due to a mixture of buyers who have yet to tax their new cars, dealers who have pre-registered an unsold car in order to meet sales targets or hire-drive cars which have not been taxed as they have not gone into service yet.

There remains concerns, however, at the level of pre-registrations by dealers and distributors, which is creating a false impression of the state of the new car market.

According to the CSO data, Toyota was the most popular brand in July, with 11 per cent of the market, followed by VW with 10.8 per cent, Hyundai with 10.4 per cent, Nissan with 7.9 per cent and Ford with 7.4 per cent.

The majority of new private car buyers - 54.0 per cent - still opted for diesel, despite the international backlash, while 94.8 per cent of new cars fell into the two lowest emissions bands.

The Department of Finance’s Tax Strategy Group released discussion documents recently on the need to review the current tax regime in light of the impact of lower emissions and future electric vehicles may have on the tax raised from motorists.