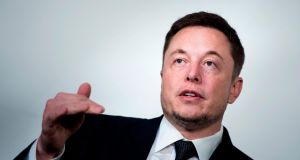 Tesla chairman Elon Musk thrust his eight fellow directors into an unprecedented situation this week by tweeting that he might take the electric car maker private. Photograph: Brendan Smialowski/AFP/Getty Images

Investors betting that Tesla shares are poised for a drop remain undeterred by a jump in its stock price following a claim by co-founder Elon Musk that he has “secured funding” to take the electric carmaker private.

Shares in Tesla rose nearly 11 per cent to roughly $380 on Tuesday after Mr Musk tweeted he was considering a buyout, but reports that the US Securities and Exchange Commission was probing whether his announcement violated securities law tempered the run. Shares closed down 2.4 per cent on Wednesday at $370.34 and, in morning trade on Thursday, had given up a further 3 per cent to trade just below $360.

The amount of Tesla stock that was in short positions – negative bets on the price – has been mostly steady since the company reported earnings last week, according to data from IHS Markit. “We saw a small net increase in new Tesla borrows intraday today, suggesting a minimal change in shares short,” Samuel Pierson, director of securities finance at IHS Markit, said on Wednesday.

“Clearly we all believe there’s an extremely low probability he can get that deal done,” he said. “He can’t do it with debt, the financials are too horrible. So it’d have to be equity, and there’s not enough stupid money to buy this company at an $80 billion valuation.”

He added: “The only reason to cover it was if we thought there was a high probability he can get a deal done, and I don’t. This morning, it was trading at $380, so the upside risk is $40. The downside is $380 if he goes bankrupt, which I think he will.”

European luxury carmakers including Audi and Mercedes are all set to debut electric sport utility vehicles, which will create unprecedented competition for Tesla, he said.

“The best quarter you’ll ever see from Tesla is the one we’re in now,” Mr Spiegel said.

The spat between the short-sellers and Mr Musk has grown increasingly public as the Tesla chief has repeatedly fought back. Last week, he took a dig at David Einhorn, the Greenlight Capital boss, whose short position in Tesla was his second-biggest loser in the second quarter.

“Tragic. Will send Einhorn a box of short shorts to comfort him through this difficult time,” Mr Musk tweeted.

Jim Chanos, the founder of Kynikos Associates and one of the most renowned Tesla bears, said the short positions “are actually one of the stock’s best valuation drivers, in my opinion”.

“One of my theories is that [Musk] will use this circus (of his own design) to suspend his second-half 2018 guidance, which many found suspect, anyways,” Mr Chanos said in a note on Wednesday morning. “The clue is in his letter, where he discusses ‘making difficult decisions’ that might affect quarterly results. Yet, according to Musk, profits are about to skyrocket! Which is it?”

“There’s one million reasons” to short Tesla shares, said Christopher Irons, the founder of Quoth the Raven Research. “You can start with the fact that the company just posted its largest net loss in history and that, if the CEO is serious about going private at $420 per share, the upside is now tapped and the risk is all on the downside.”

“Put simply, I still don’t believe in the company’s ability to be consistently profitable and I still believe that its valuation is way too high,” he added. “If I lose by the company being bought out or taken private by somebody willing to pay this valuation for it, I can make peace with that.”

He, for one, has skin in the game: in a tweet, Mr Irons said: “If $TSLA finishes the week under 300 I’ll get a ‘funding secured’ tattoo.” – Copyright The Financial Times Limited 2018

Leave it to a flamethrower peddler to redefine the trope about boardroom hot seats. Tesla chairman Elon Musk thrust his eight fellow directors into an unprecedented situation this week by tweeting that he might take the electric car maker private.

Six of them issued a three-sentence statement in response that failed to extinguish a blaze of questions, including how the deal would be funded, in what way it could be structured and how likely it is that the company pulls it off. The directors are probably used to close examination by now.

Tesla’s board came under fire this year as the company was struggling to meet production goals for the Model 3 sedan and burning through billions in cash. A shareholder pushed for the election of an independent chairman, and an activist investor group waged a battle against the re-election of three directors who were up for vote.

While the board prevailed, its independence and competence in serving as a check on the CEO are about to be tested like never before.

“The board has to assert themselves,” Betsy Atkins, a director at companies including Wynn Resorts and Volvo Cars, said Thursday. “The board is responsible for the CEO and they are the oversight mechanism for the shareholders. If they have a cowboy, they’ve got to reel him in.”

The six directors said on Wednesday that Musk (47) began a conversation last week with the board about going private and discussed how it could be better for the company’s long-term interests. They also said that the chief executive officer “addressed the funding for this to occur”, shedding little additional light on Musk’s initial tweet in which he claimed to have secured funding.

“That seems like a very carefully phrased statement,” said Adam Pritchard, a professor of securities law at the University of Michigan. “They’ve added some credibility” so that Musk “doesn’t look like a nut job,” and gave him cover by explaining that there’s “apparently something more to it than him just thinking out loud”.

Until there’s a formal proposal for the sale of the company, the board doesn’t have to make any further public disclosures, Pritchard said. Next steps include setting up an independent committee and a formal structure to evaluate the sale -- and one that isn’t beholden to Musk.

That could be tricky. Several of Tesla’s directors have close business or personal ties to the chairman and CEO. – Bloomberg