Airline has complained to competition authorities over Air Berlin ‘stitch-up’ 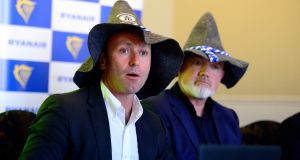 Kenny Jacobs left and David O’Brien of Ryanair during their press conference in Dublin on Tuesday. Photograph: Cyril Byrne

Ryanair claimed Germany “is becoming the banana republic of European aviation”, as it made its latest broadside against Lufthansa’s likely takeover of much of Air Berlin, which collapsed earlier this month.

The Irish carrier’s commercial officer, David O’Brien, has said former German flag-carrier “will probably succeed” in buying the most attractive parts of its smaller rival, reiterating Ryanair’s view that the process is a “stitch-up” which would lead to Lufthansa growing its share of the total German market to 60 per cent from 47 per cent currently.

“We’re the biggest airline in Europe with the strongest balance sheet and we weren’t invited into the conversation,” said Mr O’Brien said at a press conference in Dublin on Tuesday, adding that Ryanair was “not entirely hopeful” about its complaints to German and European Union competition authorities about the process.

“The business model is early capitalist,” he said. “If Ryanair became involved, I would have great fears. Air Berlin employees not fired would probably work on Irish labour contracts as self-employed subcontractors.”

For Berliners, he said, the “dependable” German flag-carrier would be best to maintain diversity of destinations from the German capital. Both Ryanair and German investor Hans-Rudolf Wöhrl have attacked the Air Berlin insolvency talks as a stitch-up to benefit Lufthansa.

German officials have dismissed as a PR stunt Ryanair’s complaints of not being invited to talks, saying the airline showed no interest in getting involved.

According to the Bild tabloid, Air Berlin last year sounded out interest from Lufthansa and EasyJet in taking over parts of the loss-making company if, as happened this month, investor Etihad pulled the plug.

“Either way, it doesn’t look as if there will be a complete takeover through one company,” said Mr Müller.

Air Berlin filed for insolvency on August 15th. The German government gave the airline a €150 million loan to safeguard some of the 8,500 jobs at stake and prevent passengers from being stranded abroad.

However, state-owned KfW bank has confirmed that it has yet to pay out an emergency state loan to finance the airline’s Air Berlin fuel and salaries, and keep its aircraft airborne.

The fate of the carrier will be decided on September 15th when a committee of creditors meets. Final bids will be due two days prior to that date, with Condor, a German airline owned by travel company Thomas Cook, also said to be preparing a bid for a number of Air Berlin aircraft.

German transport minister Alexander Dobrindt has publicly backed Lufthansa to buy a large portion of Air Berlin’s assets, saying the country needed a “national champion” in international aviation. However, the German government has insisted it is not involved in talks on the sale of Air Berlin and does not have a preferred outcome for the process.

Ryanair’s chief marking officer, Kenny Jacobs, said: “In some ways, Germany is becoming the banana republic of European aviation, which you obviously don’t expect when you think that Germans do everything right.”

Air Berlin racked up €2 billion of net losses over the past four years and reported €1.16 billion of debt at the end of 2016.

Meanwhile, Mr O’Brien said Ryanair is continuing to work on potentially putting in a final binding bid for troubled Italian airline Alitalia by a deadline early next month. The company has already put in a non-binding bid for the Italian carrier.

He said that the open, transparent process being run around the Alitalia sale contrasts sharply with that of Air Berlin.

Italian daily newspaper La Stampa reported on Monday that Ryanair, Lufthansa and EasyJet are the most interested bidders for the fleet and flight operations of Alitalia and that the company may be sold in two parts. A sale may close in early November, it said.