Ryanair chief executive Michael O'Leary has said that the roll out of Covid-19 vaccines will boost the airline industry, but that he does not see the sector recovering "significantly" until Easter 2021. Video: Reuters 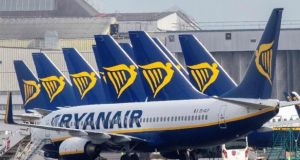 Ryanair has warned that it could permanently reduce some services locally and base more of its operations outside the State if action isn’t taken to protect the aviation sector.

The Irish carrier, which recently closed its bases in Cork and Shannon until April due to the Covid-19 crisis, has called on the Government to do more to ensure the overall survival of air travel in Ireland.

Speaking to The Irish Times, Eddie Wilson, chief executive of Ryanair DAC, the airline group’s biggest subsidiary, said the Government needs to look beyond day-to-day Covid-19 figures to consider not just what is happening now but also the longer-term implications arising from the crisis.

The airline has previously threatened withdrawal of services due to a failure to act on recommendations from the aviation recovery taskforce, which was convened earlier this year. It has also been frustrated at the State’s delayed adoption of the EU traffic light system for international travel and by its recommendation that Irish people don’t travel home for Christmas.

Ryanair and other carriers that operate locally, such as Aer Lingus, have been pressing the Government to increase supports during the pandemic and to enable them to bounce back in a post-Covid-19 world.

“We’re taken for granted with an assumption that we are just going to show up every day even as we’re coming out of the worst aviation crisis ever seen. The Government needs to think about how it can retain the sector and that is by making a good business case for its survival,” he said.

Mr Wilson said he wasn’t issuing a threat to the Government, but was warning it of possible business decisions Ryanair may take in the near future. “We want to open Shannon and Cork again and to push traffic back into Ireland, but there are a couple of macro things happening in Europe that Ireland could get sidelined on in a post-Covid environment,” he said.

With three possible coronavirus vaccines expected to be given the go-ahead soon, Mr Wilson said the sector as a whole will look very different when things start to get back to normal next summer.

Ryanair said on Tuesday it expects to fly at 30 per cent capacity over the holiday period, but passenger numbers are expected to rise next year to as high as 80 per cent as vaccines are rolled out.

“There’s going to be less traffic and fewer airlines and the airlines that are around are going to be smaller with one exception, Ryanair, which is going to continue to grow. Wouldn’t it be a shame if Europe’s largest airline, which is an Irish company, had its traffic head elsewhere?” he said.

Mr Wilson said “all the answers” for the sector are contained in the Government’s own aviation recovery taskforce report, which he said has been sitting on Ministers’ desks since early July.

Mr Wilson said Ryanair has a proposal in with the Minister for Transport Eamon Ryan, and is seeking a response from him outlining incentives that would bring Ireland in line with those being offered elsewhere, such as cheaper landing fees.

“We have the largest airline and it will be a shame if traffic goes elsewhere when we could bring it onto this island because the 325,000 people in tourism are going to depend on us and other airlines here next summer. If they [the Government] don’t do something, they are going to miss the boat,” said Mr Wilson.

Ryanair has put on 40 extra flights to the Republic for the holiday period, with Mr Wilson saying bookings were relatively strong. He added that there will be “pent-up demand” from the public to fly again once the pandemic is coming to an end, with short-haul travel likely to bounce back first.

Mr Wilson said Ryanair had no plans to insist that passengers have proof of vaccination within the European Union.

He also said the carrier has “no interest at all” in acquiring any part of troubled airline Norwegian, whose Irish subsidiaries obtained interim court protection last week.

9 Makhlouf sees ‘potential surge in demand’ once restrictions are lifted