Norwegian Air Shuttle, and five Irish-based subsidiaries, that own much of its aircraft, last week received interim protection from creditors from the High Court in Dublin 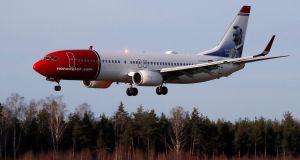 A Norwegian Air Boeing 737-800 landing at Riga International Airport in Latvia earlier this year. Aircraft manufacturer Boeing is bidding to stall the troubled airline’s $1 billion lawsuit against it while the Scandinavian carrier lines up a rescue attempt in the Irish courts. Photograph: EPA/TOMS KALNINS

Boeing is bidding to stall troubled airline Norwegian Air’s $1 billion lawsuit against the US aircraft manufacturer while the Scandinavian carrier lines up a rescue attempt in the Irish courts.

Norwegian filed a $1 billion claim for damages against Boeing in the US courts last summer to recover the cost of 18 of the manufacturers’s 737 Max that it had bought.

Boeing recently told a federal court in Illinois that it is seeking to have part or all of the US action dismissed. The issue is due for hearing on December 15th, eight days after the airline’s Irish case is due back before the High Court in Dublin.

Norwegian bought 18 Boeing 737 Max aircraft for $1 billion, but could not fly them following the regulators’ decision. The Scandinavian group subsequently cancelled an order for a further 92 craft.

The lawsuit includes claims for damages for the craft that it could not use and also involves maintenance agreements with Boeing.

Norwegian calculates that being unable to use the Max knocked $185 million of operating profit last year and contributed to the financial woes that prompted key parts of the group to seek the Irish court’s protection.

Norwegian group companies owe about $5.2 billion to creditors. The Irish entities under protection account for $4.6 billion of this sum. The three leasing companies hold 72 of its 140 aircraft.

Meanwhile, it has emerged that lawyers are debating whether the Irish court’s order could be enforced if a creditor took action against Norwegian Air Shuttle in its home jurisdiction.

Norway’s biggest newspaper, Aftenposten, reported that University of Oslo legal academic Professor Erik Røsæg agreed that the situation was unclear. “But common sense dictates that what is happening in Ireland should be respected,” he told the newspaper.

An independent expert report written by Ken Fennell, partner in Deloitte’s Dublin office, maintains that Norwegian has a reasonable prospect of survival if it can cut its fleet and future aircraft orders and attract new finance.

If the High Court confirms his appointment and protection from creditors on December 7th, Mr Wallace will have up to 100 days to come up with a rescue plan based on these and other proposals.