Airline will offer 119 services from Republic’s airports next winter 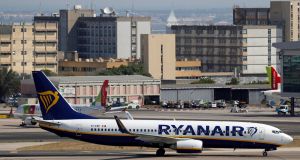 Ryanair is to increase its flights to Lisbon.

Ryanair will fly two new routes from Dublin and Knock and expand services from other Irish airports next winter, the airline said on Tuesday.

The carrier launched its Irish winter 2019 schedule, which will include 119 services from five airports, Cork, Dublin, Kerry, Knock and Shannon.

Ryanair will begin flying every day from Dublin to Milan Malpensa in Italy in what will be a new route next winter.

Similarly, the airline intends launching a new weekly route from Knock Airport in Co Mayo to Tenerife in the Canary Islands.

Ryanair will add six new winter services, that is destinations not previously served during the winter, from Dublin, to Bordeaux, France, Bournemouth and London Southend in Britain, Gothenburg in Sweden, and Kyiv in the Ukraine.

It will also boost frequencies on services to Cologne in Germany, Lisbon in Portugal and Malaga, Spain.

The airline will have 82 routes on its winter schedule from the capital and expects to grow the number of passengers it carries there this year by 6 per cent to 14.1 million.

The carrier will have 14 winter services from Cork, including four new ones to Alicante, Spain, Budapest, Hungary, Malta and Poznan in Poland.

Ryanair said that it will fly 12 routes from Shannon Airport and four from Kerry.

The airline’s chief marketing officer, Kenny Jacobs, said the winter schedule would help deliver 17 million passengers to and from the Republic a year as the carrier grew traffic by 6 per cent. He added that this would support 12,750 jobs in Irish airports.