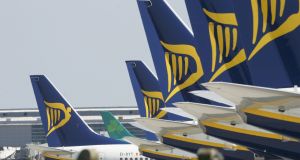 Ryanair shares surged after the airline reported that profits grew 43 per cent to more than €1.24 billion in the 12 months ended March 31st.

The Irish airline carried more than 106 million passengers over the period, its financial year, generating €6.54 billion in revenues, 16 per cent more than in 2015.

Its stock climbed 2.8 per cent to close at €13.58 from an opening show of €13.21 on the Irish Stock Exchange on Monday. More than 3.3 million of its shares changed hands on the day.

The profits were slightly ahead of the €1.17 billion to €1.22 billion guidance given by the airline to the markets earlier this year.

The figures exclude a one-off €317.5 million accounting gain from the sale of its Aer Lingus stake to International Consolidated Airlines Group.

Ryanair distributed the €398 million proceeds from the deal to shareholders in November.

At the end of March it had net cash of €312 million, after a capital spending bill of €1.2 billion, debt repayments of €385 million and payouts to shareholders of €1.1 b illion.

The airline is more than 80 per cent through an €800 million share buyback programme announced in February and expects to complete it in September.

Chief executive, Michael O’Leary, cautioned that this depends on the strength of summer bookings and earnings from passengers next winter, along with the continued strength of sterling, the absence of shocks and no further cancellations due to air traffic control strikes.

The Brussels terror attacks and air traffic control strikes in France and elsewhere hit yields - the revenue earned from each passenger - in the three months to the end of March.

Mr O’Leary signalled that the airline is likely to cut fares through the current financial year.

The timing of Easter means that the holiday will not fall into either three-month period this year, which will also hit demand.

“Since we continue to be load active/yield passive we expect - with very limited visibility - average fares to fall approximately 7 per cent this year,” Mr O’Leary said.

He noted that 2016 was a year in which Ryanair delivered significant traffic and profit growth in all four quarters.

“We opened more than 100 new routes as we became the first airline ever to carry more than 100 million international customers in a calendar year,” Mr O’Leary added.