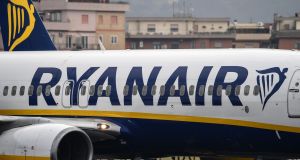 Ryanair said on Monday that revenues had risen 9 per cent to €1.53 billion in the three months ended December 31st. Photograph: Alberto Pizzoli/AFP/Getty Images

The airline announced a major shake-up of its business that will see it shift to a group structure – led by chief executive Michael O’Leary – that will hold four subsidiaries.

The carrier also revealed that independent director Stan McCarthy will replace long-standing chairman David Bonderman next year. Ryanair shares fell as much as 4.8 per cent in early trading before regaining ground and closing down just more than 2 per cent for the day.

Ryanair said on Monday that revenues had risen 9 per cent to €1.53 billion in the three months ended December 31st.

An average 6 per cent fall in air fares left the business with a €19.6 million loss for the quarter, against a €106 million profit during the final three months of 2017.

The loss excluded a €46.5 million once-off deficit in its Austrian subsidiary Laudamotion, of which Ryanair recently took full control.

Mr O’Leary described the loss as “disappointing” but argued that it meant passengers were enjoying lower air fares.

Higher fuel and passenger compensation costs offset a 26 per cent increase in ancillary revenues, earned from baggage charges on onboard sales.

Ryanair left unchanged its recent prediction that profit for its full financial year, which ends on March 31st, would fall between €1 billion and €1.1 billion. The airline has issued two profit warnings in recent months.

“We do not share the recent optimistic outlook of some competitors that summer 2019 air fares will rise,” Mr O’Leary said.

He forecast that European airlines will have too much capacity through this year, continuing to keep fares under pressure.

Over the next year, Ryanair will shift to a structure similar to that of rival International Consolidated Airlines Group, Aer Lingus’s parent group.

Mr O’Leary has agreed a new five-year contract with the group, meaning he will stay until July 2024.

Mr McCarthy will become deputy chairman from April and succeed Mr Bonderman at the head of the board in summer 2020.

Neither Mr Bonderman nor independent director Kyran McLaughlin will seek re-election to the board at the 2020 annual general meeting.

Shareholder advisor groups and some fund managers called on the airline last year to put in place a succession plan for Mr Bonderman.

Ryanair bought the remaining 25 per cent of Austrian carrier Laudamotion that it did not own in December.

The Irish company expects Laudamotion to lose €140 million this year, down from the €150 million originally projected.

Mr O’Leary said Ryanair believed this would narrow to between break-even and a €50 million loss over the 12 months from the end of March, depending on how Laudamotion performs during the peak summer season.

“By year three Lauda is on track to grow to over 7.5 million customers and profitability,” he added.

Separately, Ryanair released figures showing that it flew 10.3 million passengers in January, an increase of 11 per cent on the same month in 2018, when it carried 9.3 million people.

Stripping out Laudamotion’s 300,000 contribution, Ryanair itself grew passengers by 7 per cent to 10 million.