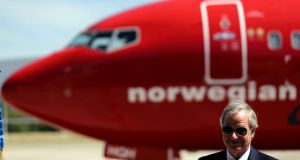 Shares in Norwegian Air Shuttle slumped by a record margin after the company raised three billion kroner (€308 million) through a share sale to avoid breaching financial covenants. The company said it is open to new takeover approaches after Aer Lingus parent IAG abandoned an eight-month pursuit.

The fully underwritten rights issue is required to increase financial flexibility and create headroom to covenants on outstanding bonds, the discount airline, based at Fornebu, outside Oslo, said in a statement Tuesday, sending the stock down as much as 30 per cent.

The stock later recovered some ground to end the session 14.6 per cent weaker.

Norwegian invited further bids after the termination of IAG’s interest led the stock to lose a fifth of its value last Thursday. The airline said it will “continue to be willing to engage in consolidation discussions that can develop shareholder value”, adding that there are no further talks planned right now.

Chief executive Bjorn Kjos, who rejected two previous offers from IAG, has been struggling to weather a cash crunch as a European fare ware depresses revenue at a time when his company is awash with capacity after one of the fastest growth spurts in aviation history. Norwegian reiterated in its statement that the focus now will be more on profitability than expansion.

“This issuance gives Norwegian flexibility, while it looks to deliver much needed improvement of its operational and commercial performance,” said Davy in a note to investors.

The carrier’s bonds recovered losses recorded last week after IAG pulled out. Its €250 million of notes due for repayment in December gained 13 cent on the euro to 96 cent, according to data compiled by Bloomberg.

IAG’s decision to walk away from a bid had spurred concerns about Norwegian’s finances, with analysts widely predicting that a capital increase was likely. The rights issue, however, is bigger than many had forecast. About 2.4 billion kroner of the total will be provided by DNB Bank, Danske Bank and billionaire shipping magnate John Fredriksen.

The company must have a book equity value higher than 1.5 billion kroner and more than 500 million kroner of liquidity to comply with bond covenants, according to a previous presentation.

Norwegian said it aims to reduce the level of spending through aircraft sales and the postponement of some plane deliveries, as well as clawing back money from Rolls-Royce in compensation for having to scrap some flights due to engine issues.

The carrier has already announced base and route cuts this year, signalling the extent of its profitability issues, something that may have deterred IAG. Deutsche Lufthansa also indicated at one point that it was mulling an offer.

Bidders may also be put off by a profit warning at Ryanair, Europe’s biggest airline, and uncertainty about how Brexit will affect flights and market developments in the UK, a major market for Norwegian.

Existing shareholders including Mr Kjos and chairman Bjorn Halvor Kise will contribute to the rights offer. Mr Fredriksen, who last year pulled off the painful restructuring of his offshore drilling company Seadrill, is getting involved after saying he’s looking for new opportunities as he continues to diversify his wealth estimated at $7.9 billion. – Bloomberg