Semi-State group says total passenger numbers at the airport jumped to 1.86m in 2018 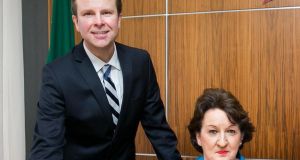 The group said Shannon Airport enjoyed “its best year this decade” with growth of 6.5 per cent bringing total passenger numbers to more than 1.86 million.

This was the first time the 1.8 million mark has been broken since 2009 and represents 33 per cent growth since 2013 when it began operating independently from the DAA, previously the Dublin Airport Authority.

The UK and transatlantic markets were the biggest performers, both up 7 per cent, the group said.

On transatlantic Shannon operated six airlines, including recent market entrant Norwegian Air, to seven destinations, which was the airport’s biggest number of services to the US/Canada in 17 years.

The group’s other main business Shannon Heritage, the largest commercial operator of day and night-time visitor attractions in Ireland, enjoyed growth of 4.3 per cent with visitor numbers hitting a record high of 924,718.

The group’s Shannon Commercial Properties division also completed the €40 million first-phase of its ongoing investment programme at Shannon Free Zone, more than doubling occupancy rates to 94 per cent since 2013.

“As a primary catalyst for economic growth for the West of Ireland and beyond, we fully understand that our improved business performance stimulates economic benefits both regionally and nationally,” he said, noting the group’s activities support 46,500 jobs annually. “When we grow, the economy grows and 2018 was our best year collectively across the group since its formation,” he added.

“We are set on an ambitious course, investing aggressively in our businesses to drive further growth in the years ahead. In tandem with this, we are fully committed to the National Planning Framework ambitions and have put in place measures to play our part in helping Government deliver on its promise of generating 75 per cent growth outside of the capital by 2040,” Mr Thomas said.