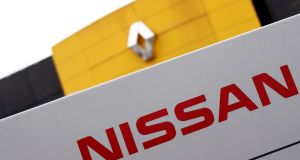 The SEC’s inquiry adds a layer of complexity for Nissan. Photograph: Christian Hartmann/Reuters

The Securities and Exchange Commission is investigating whether Nissan accurately disclosed its executive pay in the US, according to several people familiar with the matter, compounding the carmaker’s woes as it grapples with the aftermath of former chairman Carlos Ghosn’s arrest.

The US financial regulator is examining whether Nissan’s executive-pay disclosures were accurate and whether the carmaker maintained adequate controls to prevent improper payments, the people said, asking not to be identified because the probe hasn’t been disclosed publicly.

Nissan, in response to questions, confirmed it has received an inquiry and said it is cooperating fully. Through a spokeswoman, Kristina Adamski, the company said it could not provide further details.

Nissan shares fell as much as 2.7 per cent in Tokyo trading, their biggest intraday decline in three weeks. The SEC investigation adds to scrutiny surrounding Japan’s second-largest automaker and its executives after Japanese authorities arrested Ghosn and another company director, Greg Kelly, in November.

Both men were indicted there over allegations Ghosn under-reported his income at Nissan by tens of millions of dollars. The carmaker -- whose largest shareholder is French alliance partner Renault SA -- also has been indicted, a step that allows prosecutors in Japan to lay formal charges.

Ghosn and Kelly were arrested after a monthslong internal investigation at Nissan uncovered what the company said were financial misdeeds by Ghosn. Both men deny wrongdoing. The SEC inquiry, launched out of its Washington headquarters, is focused on whether lapses by Nissan in reporting on its executives’ pay violated US securities law, one of the people said.

The regulator’s work was slowed by more than a month of partial US government shutdown, another said. While the SEC’s civil inquiry is in its early stages and may not point to wrongdoing, it adds a layer of complexity for Nissan and the two former executives.

The SEC, which often works closely with law enforcement, could seek financial penalties and injunctions to prevent violation of laws or SEC rules.

John Nester, a spokesman for the SEC, declined to comment.