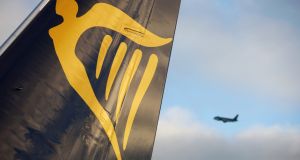 Thousands of holidaymakers in Ireland will learn on Tuesday whether they face travel disruption with Ryanair pilots voting on taking industrial action for the first time.

It also emerged that indusrial unrest at the airline’s Irish operation could spread to other countries.

German-based Ryanair pilots began balloting this week for strike following what their union VC called the failure of talks on improved pay and conditions.

Irish-based pilots will stage a one-day strike on Thursday of next week – July 12th – after 99 per cent backed industrial action in a union ballot.

The strike could be the first of a series of one-day stoppages by Irish-based pilots employed directly by Ryanair that are members of the Irish Airline Pilots’ Association (Ialpa), part of trade union Fórsa.

The union said on Tuesday that it had advised Ryanair that it will notify the airline of additional strike days in due course.

Should it go ahead, the strike will come the middle of the holiday season, when thousands of Irish people are travelling abroad daily.

Pilots at the budget airline have been voting over recent weeks in a ballot for industrial action up to and including strike in a row over seniority.

They are seeking a system covering base allocation and transfer, promotion, the timing of annual leave and other issues determined by length of service.

Ialpa-Fórsa complained that there was no transparent system for covering such issues.

Ryanair pledged to contact customers flying on July 12th next Tuesday should this “unnecessary” strike go ahead.

The airline said that it has already forwarded draft proposals on recognition that cover the issues raised by the pilots and invited Fórsa several times to meet to discuss them.

Trade unions must give employers seven days’ notice if they intend to strike or take some other form of industrial action in a dispute.

If a stoppage were to go ahead it would be the first strike by Irish-based pilots at Ryanair.

Ryanair pledged to recognise pilot and cabin-crew unions last December in sudden about-turn on a policy of refusing to deal with organised labour.

Since then it has struck recognition deals with the British Airline Pilots’ Association, its Italian equivalent, Anpac and cabin crew union Unite.

3 BoI to close branches in North, property prices to rise 4%, and tricky vaccine issues for employers